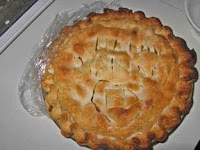 The day finally came. I wonder if Ruth Olive felt the same way when little Edgar F. arrived on the scene in 1925. Back in Dodge City, law and order reigned due to the efforts of Bat Masterson and Wyatt Earp, etc, there were no fences so motorcycles and horses had free access to the great outdoors. The streets of Dodge City, mud in rain and dust in dry weather early on, were bricked over with thick red bricks. A bit bumpy driving.

Grandpa Combs had the first franchise for Harley Davison motorcycles in Dodge City before Edgar was born. During WW I, he ‘taxied’ people and goods on his bicycle. He took his wife and three little ones via motorcycle and a side car to Pike’s Peak. His story is here.

And then 82 years ago, little Edgar was born. He lived in Rosepine, LA for a time as a teen. He served his country in WW II. His experiences included farming, rancher, being a minister, working for AVSCOM, Walmart warehouse, but those were incidental to his main purpose in life. Foremost Edgar is a loving husband, father, grandfather and great grandfather and above all, a Christian.

His propensity to learn things electronic continues to this day. From ham radio, fixing radios, televisions, washers, dryers, toasters, computers has been an ongoing hobby. When he looks at a schematic, it makes sense, while to me it is an overwhelming electronic maze with no purpose.

In February we will celebrate 56 years of marriage. When we were married for a year, I told Mom how much I loved my husband. Now I know why she laughed. It is incomparable.