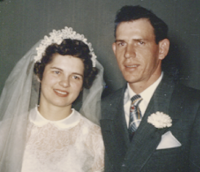 Happy Birthday to Ed, on his
88th year on this earth.  He
is my husband of almost 62 years, father of our four children, and proud
grandfather of twelve grandchildren.  He
is also happy to have seven great-grandchildren as well.

We met in Grenola,
Kansas.  My first impression was formed
watching him amble on cowboy boots into the living room. He took off his hat,
tossed it across the room where it landed on table lamp shade.  When we were introduced, neither of us were
impressed, looked at each other, mumbled, “Hello”, and turned away.  Somehow that changed rapidly.
During this time while I was in
Grenola, leading singing for a revival, Ed had a birthday.  I made him an apple pie with, “Happy
Birthday” etched in the crust. Three months later, February 1st, we
were married. 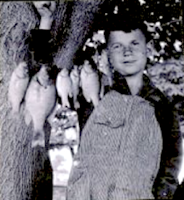 Ed was born in 1925 in Dodge City, Kansas, to his
parents Rufus Edgar and Ruth Olive (Starkey) Combs.  He had two older brothers and two
sisters.  Two years later his mother died
in childbirth. Ed’s father remarried and soon Ed had a little sister.
In 1938, the family moved to
Rosepine, Louisiana.  Since Ed did not
enjoy school, he loved the fishing and being in the woods in Louisiana.  After he graduated from high school, he
volunteered and was inducted in the Army on December 28, 1943.  He served in the Asiatic Pacific, and was
honorably discharged November 21, 1945.  He told his story of serving in WWII to Ernest
C. Frazier. The book, The Boothill Coffee Club, 1, a collection of stories of veterans is published. Ed’s Dad owned several ranches and Ed
worked on a cattle ranch for several years after his discharge. 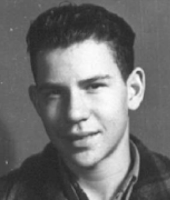 Our
first home was on one of the ranches near Piedmont, KS.  We lived in a two-room house that Ed wired
before we were married. He piped water from a spring across the road.  He and his Uncle Gallio added another two
rooms to the small house.  After we had
been married for almost a year, we moved to Joplin, Missouri, with our son Dan,
two months old, and Ed attended Ozark Christian College for two years.  From then until we moved to Rogers AR, our
life was a series of moves.  Paul, Tim
and Anna were born in three years’ time during those moves that ranged from
Kansas, Oklahoma, Indiana and Illinois. The
move to Arkansas came after Anna graduated from High School.
What did we find in Rogers,
Arkansas, for 38 years?  We found many
friends and family in Rogers Christian Church.
Ed worked there as an elder, teacher, greeter, janitor, and visiting the
elderly, serving them communion.
Whenever there was a need, Ed was there.

What a shock, when Ed was
diagnosed with a type of Dementia in April of 2012. Once more we prepared to
move close to one of our four children, Tim.
Although our children live in four different states, they all came to
help us get ready and move.
We have not ceased counting
our blessings and know whatever lies ahead, with our faith in God, we will be
OK.  We continue to trust in God and His
Providence.
What kind of vocations has
Ed engaged in?  A rancher, a student in
Ozark Bible College, an ordained minister for seven years, Combs Automotive for
a period of time.  He worked in AVSCOM in
St Louis for seven years before we moved to Rogers, AR.  In Rogers, Ed worked in Walmart Warehouse and
as an armed guard to transport money and also television repair for a time.
His avocations include
interest in fixing radios, televisions, computers, and trying to invent energy
from water.  His ability to tinker
extended to electrician work, plumbing, building and fixing cars.  He taught our children to be proficient in
these areas as well. When our sons were in upper elementary, he learned the Morse
Cod with Ham Radio.  He took his sons to
meetings and taught the code.  Our oldest
son received a ham radio license before he entered high school and spent many hours
using the Morse code.  Putting up an
antenna on a two story house did not daunt Ed and his three sons.
Ed’s patience, gentleness
and ability to teach and love, brought many avenues to  serve His Lord through the years.
When I asked what scripture
was his favorite, he thought for a moment and said, “The Lord is my Shepherd.  Every time I read that scripture, I picture
Jesus, the Shepherd, holding me in His arms.”
According to The Voice, the
first four verses are recorded here:
The Eternal is my shepherd,  He cares for me always. He provides me rest in rich, green fields
beside streams of refreshing water.
He soothes my fears;  He
makes me whole again, steering me off worn, hard paths  to roads where truth
and righteousness
echo His name.
Happy
Birthday to my dear husband!  I love you.