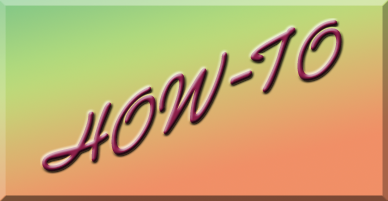 Almost
sixty-one years ago, we taught our oldest how to talk, walk, eat alone, and how
survive in this world.  When God gave us
four children in four years, I went to the local library to search for a ‘how
to’ book on how to raise children. Dr. Spock was the only author who ventured
into child-rearing writing in the 1950’s.
And you know how that went.  (Now
many trees have been sacrificed to flood the market to help us be ‘in the know’
to raise children successfully.)
Any
time, through the years, I see an article that begins, “How To…”, it catches my attention.
This title portion of any article has grown potentially through the
years.  “How To” has spawned jokes,
books, television fodder – a whole economy of its own.
I
spent years learning to play the piano, going through the painful ‘Hannon’s’,
scales, finally I was able to achieve some mastery.  The day I saw a book entitled Play the Piano in a Flash! I was
amazed.  Had I missed something, the easy
way?  Then the title “How to Play the Piano by Ear”, was
published.  Again I wondered, had the ear
replaced the fingers? Talented ears?
I
am still susceptible to the slick magazines that promise ‘how-to’s’ to erase
the pounds years have added or how to de-clutter my house or my life.  I even downloaded “How to Write a Book in a Weekend,” just last week.  The book has not yet emerged. When I saw the title,
“How to Train Your Dragon,” I
laughed.  Now I could be equipped for the
impossible, if I would only read this book. 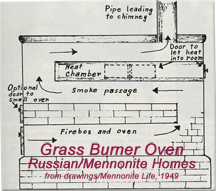 Even when reading a family genealogy
book, A Mennonite Heritage, A Genealogy
of the Suderman and Wiens Families, 1800-1975 by Carolyn L. Zeisset, I
found ‘how-to’s” were needed even then.
The pattern of each Mennonite house in Russia was built the same way with
the house, barn and granary all under one tile roof.  It was built of sandstone, limestone or
brick, with whitewashed stucco walls. Doors to the rooms of the house were
built with two pieces so the upper half could be opened while the lower half
remained closed.  The most remarkable
feature of a Russian Mennonite house was its stove, built into the interior
walls, as near the center of the house as possible, so that it usually heated
three to four rooms.
As I read further on, page 21, I
thought about the role of ‘How-to” and how it was implemented in the time the
Mennonites lived in Russia. (1855 –1943 with some migrating to United States in
the later 1800’s)  How a “How to Build a Serviceable Mennonite Stove”
in Five Easy Steps” writing would have appeared.
•
Procure either bricks or stone, enough to construct a stove five to
seven feet long, six to seven feet high, and two to two and a half feet wide.
•
Construct the bottom firebox, four to six feet long, one and a half to
two feet high, and about one and a half feet wide.
•
Above the firebox, at the front of the structure, construct a small
oven, opening into the kitchen for baking or heating water.  Steam will escape through a pipe fitted into
the oven.
•
Near the top, toward the back of the stove build a hot air chamber
fitted with doors which can be opened in winter to heat the parlor and
bedrooms, which share walls with the stove.
• Build the smoke passage from the
firebox to the back of the stove, up over the oven, coming to the front of the
stove, and again going up over the hot air chimney.  This chimney will be used to for smoking
wheat.
Add to this ‘book’, recipes and
agriculture know-how, one finds that the no-frills of survival motivates the
‘how-to’, not training a dragon, entertaining children, investing money,
patterns for selling.  (I remember Mom
cutting a pattern from newspaper with a few measurements and snips of a
scissors.  She learned well and not from
Simplicity.)
Then
I found a ‘how-to’ book that trumps all others, and the first admonition I read
works in so many other ways….“Be still, and know that I am God.”
Psalm 46:10.  As I continue reading, I
find that God gifted his followers with abilities beyond their knowledge such
as Noah building the ark.  It follows
that the God who created the earth and He created us, has the ultimate ‘how-to’
for every aspect of our lives.
When
God prepared for the construction of the tabernacle, He chose a worker, and
gave him the ability and skill for the undertaking.  Exodus 35:30-35 – When Moses said to the people of
Israel, “See, the Lord has
called by name Bezalel the son of Uri, son of Hur, of the tribe of
Judah; and he has filled him with the Spirit of God, with skill, with
intelligence, with knowledge, and with all craftsmanship, to
devise artistic designs, to work in gold and silver and bronze, in
cutting stones for setting, and in carving wood, for work in every skilled
craft. And he has inspired him to teach, both him and Oholiab the son of
Ahisamach of the tribe of Dan.  He
has filled them with skill to do every sort of work done by an engraver or
by a designer or by an embroiderer in blue and purple and scarlet yarns and
fine twined linen, or by a weaver—by any sort of workman or skilled designer.
Our God gives us life and He gives us abilities
and strengths according to His plans for our lives.  And this is the confidence that we have toward him,
that if we ask anything according to his will he hears us.  I John 5:14
• And God gave Solomon wisdom and
understanding beyond measure, and breadth of mind like the sand on the
seashore, I Kings 4:29
•  “For God so loved the world, that
he gave his only Son,
that whoever believes in him should not perish but have eternal life. John 3:16
•  And this is the
testimony, that God gave us eternal life, and this
life is in his Son. I John 5:11
•  Now may our Lord
Jesus Christ himself, and God our Father, who loved us and gave us eternal
comfort and good hope through grace,
comfort your hearts and establish them in every good
work and word. II Thessalonians 2:16-17
If
we want peace, if we want a life that provides security everlasting, then we
must protect our borders of faith and trust.
There is a huge cultural tug and pull that battles for our attention
away from our God of Gifts.  Psalm 127:1
makes plain ‘how-to’ achieve the peace we look for in this life. “Unless the Lord builds the
house, those who build it labor in vain. Unless the Lord watches over the
city, the watchman stays awake in vain.”