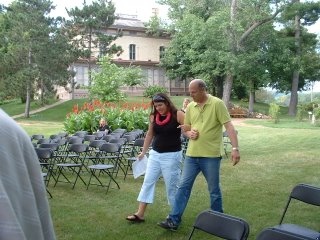 And Cory and Sarah Zebell were married on July 22nd, 2006, at the beautiful Villa Louis Historical Park on an island in the Mississippi River at Prairie du Chien. But what you didn’t see were the preparations and the lists.

Being Grandparents of the Bride brings a bit more perspective to the occasion, but we did experience some of the aspects.

Paul and Tim worked on the video camera/extension cords, etc. The music was via CD’s, so there was another need for power. As well as for the coffee pots for the reception. Having the wedding in the park was beautiful, but a little less convenient.

That was on Friday. No one slept much Friday night.

As Sarah said to Cory on Saturday, “I am going to be your wife today!” That kind of excitement continued all day. We were given instructions as to when to arrive at the Villa.

Cory and Ben found a car wash and cleaned out the red truck for the bride. Ben told me about where to find a car wash, too, since a bevy of birds decorated our car at one point or another. After driving from one end to another looking for one of the two car washes — I stopped at a travel information place. After listening to a long dissertation of cheese visitation, my mouth simply exploded – “Car Wash!” The lady grinned. I retraced my way, and wondered if I would ever find the car wash. There it was Wonder Car Wash. Immediately I drove in. And there were Ben and Cory! Ben helped me find the coin machine, etc. I relaxed. My grandson would help me.

Grandpa went with Paul to help last minute setups at the Villa. Meanwhile, I cut buns with Carolyn’s Mom for the mammoth pile of beef and pork meat sandwiches that would be at the reception. Pretty soon it was time to get dressed. The bride dressed at the motel along with bridemaids. The result was some mighty pretty tuxed groom, groomsmen, and fathers of the bride and groom.

Picture time began about 2 pm and continued until nearly time for the wedding. People arrived, the family lined up to go down the aisle. Then suddenly there was wild waving at the girls manning (girling) the CD’s. There was a brief delay as we waited for one person to appear. Finally the wedding began. And just as quickly, it was over. The sky gathered clouds to watch and once clapped their hands in joy. A few raindrops fell, but seemed to realize that this wedding — the union of Cory and Sarah Zebell — need sunny skies all their days.