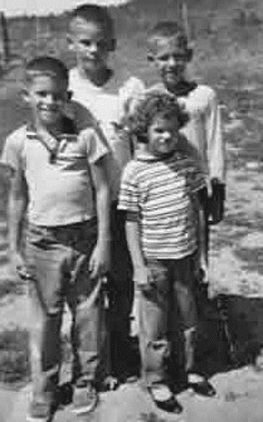 What do I remember when I think of family and memories of the past? I remember a time each day as the sun drooped in the western sky – Supper Time. From the time when I was small I looked forward to the time when Daddy came home. My brothers and I would run to the door to hug Dad with a shout!

Every evening our kitchen filled the house with aroma of a good meal that Mom prepared. Sometimes it was just potato soup and fresh bread. And we were soon seated around the table, chores done, and we would watch Dad fold his tired hands and pray, “Komm Herr Jesu, und segne ulles was du uns aus Gnade bescheret hast”. (Come, Lord Jesus, be our guest, and let these gifts to us be blest. Amen) I loved the way Dad said bescheret.

After the meal, I usually washed dishes, since my brothers took care of the cow and the chickens. Then we settled down with homework, talking and just being family.

When I grew up, I greeted my husband and father of our children. When they were young, there were spills and mishaps at the table. We often thought we needed a drain in the floor so we could hose down the area after Supper Time.

Then came the time when our four children were in high school. Supper Time became a time of laughter and joy as the ideas flowed and grew into silly thoughts. Each comment elicited laughter, and then someone else would comment. One evening I noticed that the teens were whispering as they passed the gallon jug of milk from one to another without pouring any. Finally I asked what they were whispering about. Television had influenced them. They were playing Spanky and the Gang. “Don’t pass the milk, it’s spoiled!”

Our son Paul had a friend named Steve. Steve often joined us for meals. Our four decided to confuse Steve. They achieved their mission by pretending to number their jokes, and laugh hilariously after someone announced any number.

My little brother married his young bride in California and they came to visit. Dad delighted in teasing her. He told her about the cold, cold weather in Oklahoma. “Why one winter, I went out to milk the cow and I didn’t need a bucket. As soon as a stream of milk flowed into the cold air, it became a milk-cycle. I just carried an arm load of the milk-cycles into the house.”

They drove to Kansas to visit the Suderman clan. All the way, Dad continued the story about how little they had to eat, and to eat very little. My new sister-in-law’s eyes grew very large when she saw the loaded table of food with several kinds of meats, side-dishes, bread and desserts. It was plentiful.

Fellowship dinners at church are like that. Plentiful, rich, and with the visiting, it makes a rich time for all.

Now I remember those times at the table as a child and as a mother. When the grandchildren come and the great grandchildren, we have a sense of the family-ness and the tie that binds of love and a sense of belonging.

There is one Supper Time during which we remember the One who gives us the cause of this joy. He died on the cross that when we accept Him, we have His promise that we will be united in Heaven.

I Corinthians 11:24-26 – The Master, Jesus, on the night of his betrayal, took bread. Having given thanks, he broke it and said, This is my body, broken for you. Do this to remember me. After supper, he did the same thing with the cup: This cup is my blood, my new covenant with you. Each time you drink this cup, remember me. What you must solemnly realize is that every time you eat this bread and every time you drink this cup, you reenact in your words and actions the death of the Master. You will be drawn back to this meal again and again until the Master returns. The Lord’s Supper is when we remember our Lord, even as He commanded. When we are gathered around His Table.

Now Ed and I have a quiet Supper, and we remember our children and our parents. Supper Time is an earthly picture of what is promised us when we belong to His family.
Can you see the joy and laughter, the family-nes,s as we sit around the table in His House?