In 1951, I met my future father-in-law. He was a quiet giant of a man, an elder in the Christian Church in Grenola, Kansas. When deep in thought he had a thundering song, “Dee, dee,” that shook the house. Then he would rub his hand over his bald head, missing the fringe of grey hair around the sides. He rose early each morning and busily attended to his business ventures throughout his life.

His favorite hymn was soon evident, “He hideth my soul in the cleft of the rock….” His faith in our Lord Jesus was deep and wide and His Word’s precious promises were constantly in his mind. Throughout his life Rufus shepherded small struggling congregations near the places he lived. When his daughter, Joyce, and her husband decided to leave their farm near Kansas, Oklahoma, the Cookson Hills Ministries began. Rufus spent many happy hours with the children there and enjoyed watching this local mission group grow.

His daughter, Norma Jean, remembers the Sunday walks along the same path, where Rufus found something new each week – a plant, a rock, a wild flower. He taught her to recognize trees by the shape of their leaves and often tested her on the next walk. He noted the beauty in wild flowers, the trees, the rocks, and the rolling hills which reminded him of his early life in the foothills of North Carolina.

He enjoyed motorcycles when they became in vogue. With his new bride, Ruth Olive Starkey, he moved to Dodge City, Kansas, and began his foray into business. He had the first Harley Davidson franchise in western Kansas. He loved riding motorcycles nearby before fences impeded and tamed the path for motorcycles. His motorcycle shop soon became a Combs Automotive Parts Company in Dodge City, Kansas, that was frequented by car dealers and farmers in the area.

He continued the business through many stages, including the depression. He talked of visiting with bankers and business men asking for advice when he was in a quandry about a situation. He continued doing this through his life time. Once, in his recorded story, he talked about the time when “a handshake is a man’s bond.”

In his later years, Rufus recorded on a reel – to – reel tape recorder the story of his life. These developed into six CD’s (transferred from reel-to-reel to cassette tape) of his life. Later they were transcribed to be placed online. They were written for his granddaughter, Susan and her children.

Rufus had an inquiring mind, he wanted to know the genesis of everything and how it worked.
In the rambling two story house in Grenola, Rufus introduced me to his son. After we spent some time together, Rufus tried to encourage me to marry his son by promising me $100 if I did so. This did not affect my decision one way or another, and later I married his son. (Now 56 years married).

After we were married a year, Rufus asked me to come shopping with him. We went to the music store in Joplin (1953). He told the clerk that we wanted to look at pianos. We were led upstairs to the piano loft. I looked across the rows and rows of pianos that stretched seemingly forever. “Choose one,” he said. I was overwhelmed, and finally chose a Chickering piano. When the clerk told Rufus the price, “He said, well I will have to sell a bull to pay for it.” That piano became an integral part of the family, complete with teeth marks of our four children as they watched Momma play.

When Rufus had an idea, the idea came to fruition through many choruses of “Dee-Dee’s” and scratching his head. From this was born a motor that caused a table to see0saw to help his circulation. When he was ready to patent it, someone else beat him by three or four months. In the latter 1960’s he invented a perpetual motion machine. He visited with the University of Kansas people concerning his invention and tried to patent it. Our sons drove him to St. Louis to visit the patent office.

Rufus enjoyed the challenge of an intense game of chess with whomever was around, accompanied by his ‘song’ as he pondered his next move. 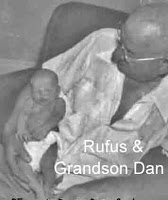 In his later life, Rufus found it difficult to walk, to hear and to see. However, this did not dim his appreciation of life, beautiful grandchildren, or lessen his faith in Jesus. He knew where He was going after this life. He wrote the following to his grandchildren, September, 1974 at the age of 87 . He died three years later.

To all my Grand Children,
Grandpa is not here anymore, he has gone across to that Golden Shore to be with Christ forever more.
God has promised and I know it is true, that he will make all things new A Children’s Home it will include,
where you may come, and not intrude,
My Eyes and Ears can see, and hear, and never fail, throughout the year.
A perfect home where all may come, a home up there for every one,to last through all eternity.
If along life’s way, you are doing good, and loving people like you should
You will reach that Goal, and hear that word, Well Done.
Of this Ditty you may make, and let whoever will partake.
The date of this is some time in the future, but some time in the future,
I won’t be able to write.

What made Rufus into the man that he became? A man of industry, faith, appreciation for God’s beauty. After transcribing his story, I learned so much about this man who suffered the death of his first wife, one son, moved from Surry County, NC, to West Texas when he was 13 years old, homesteaded in western Oklahoma, worked for the railroad in Kansas, had a motorcycle delivery service during World War I, and drove up Pike’s Peak in a motorcycle with his wife and two small children in the side car.

His parents, John William and Matilda Jane (Burrus) Combs, nurtured his faith. His mother cooked over an open fire in the proverbial log cabin in the hills. Rufus wore homespun scratchy linen shirts (he listened to his mother spinning flax until late at night). His Dad worked with wood making ax handles and other wooden items. In all things they gave thanks to the Lord for His goodness.

When my Mother (Anna D. Siemens) met Rufus, she penned these words:
Have you ever watched the eagle
Tumbling, circling, soaring high?
Instinctively, with speed and power
He charts his pathway through the sky.
When wings are bruised he dips in flight
To mourn the loss of mate or nest;
But builds anew on other slopes
To soar again his very best.

Untamed, the ancient eagle goes
Now faltering in unsteady flight;
With crippling wing and blinded eye
He flies through dusk and out of sight.
We shall not mourn! We will wait the dawn
To see this eagle fly once more;
In power and strength he’ll peak the sky
To soar through heaven’s open door.