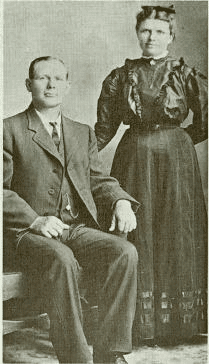 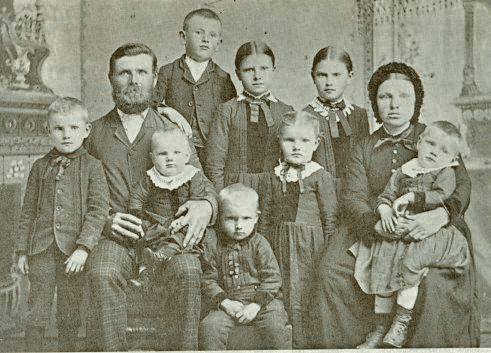 On June the 7th, our granddaughter, Anna Michelle will marry her best friend, Jason. Preparations have been underway for many months. The dress, the invitations, the church are ready. Michelle’s favorite chapter is Isaiah 12:2-6 “Yes, indeed—God is my salvation. I trust, I won’t be afraid. God—yes God!—is my strength and song, best of all, my salvation!” Joyfully you’ll pull up buckets of water from the wells of salvation. And as you do it, you’ll say, “Give thanks to God. Call out his name. Ask him anything! Shout to the nations, tell them what he’s done, spread the news of his great reputation! “Sing praise-songs to God. He’s done it all! Let the whole earth know what he’s done! Raise the roof! Sing your hearts out, O Zion! The Greatest lives among you: The Holy of Israel.”

This wedding reminded me of the weddings that led to this moment. As I searched through keepsakes, I found an invitation to a 50th wedding anniversary of my great grandparents. It held mysteries as it is in the German language. Jacob and Justina Loewen were married in Hillsboro, Kansas in 1878. Both were born in Russia and emigrated to this country where they met. Justina, a cheerful happy teenager, worked in the Loewen home. Their time of dating was shortened in those days. The wedding took place on a Sunday, 15, December, at the close of a sermon in the Ebenfeld Mennonite Church. Elder Peter Eckert announced that a young couple wished to be married. Jacob Loewen, Jr, came from the men’s side and Justina Leppke came from the women’s side. She was dressed in elegant black sateen, while he wore a starched white shirt and dark trousers. The couple exchanged vows, the preacher prayed and spoke God’s rich blessings on them. Then the young couple returned to separate sides of the church as husband and wife. When Justina sat down, she covered her head with a scarf to indicate she was now married. Immediately the newly weds settled down in a one-room apartment in the basement of the parents, Jacob Loewen Sr., for 2 1/2 years. (Chronicled from their son, Solomon Loewen). As Psalms 127 says, ‘the children are a heritage of the Lord’, and by 1890 they had eight children, Solomon came later. (See the family picture) After more years passed they were blessed with 60 grandchildren. The marriage lasted over 62 years.

Anna Loewen, their oldest child, learned to work hard at home. She married Gerhard Suderman March 8, 1900 in the same church where her parents were married. Like her Mother, Anna was a congenial happy lady. They, too, celebrated their 50th wedding anniversary in 1950. My memory of their anniversary is that Grandmother Anna wanted a silver dress for the anniversary, for she wore a black dress for her wedding. Anna received a cow for a wedding present from her father.

In her journal, Anna Loewen wrote, “it was a beautiful day in spring, the 8th of March 1900 when Gerhard Wiens and Anna Loewen began their life together. The wedding was quite an affair. The sun came up nicely, although a heavy snow had drifted and blocked the roads, people came to attend the wedding. Dinner of Zweibach, boiled ham and coffee was served to the closest relatives. At 2 pm, Gerhard and Anna came into the room, hand in hand, with no attendants, as the ceremony began. Reverend Henry Schroeder read scripture and had prayer.’

Reverend Johann Foth read Jeremiah 32:37-42, which he followed with a sermon. Watch for this! I will collect them from all the countries to which I will have driven them in my anger and rage and indignation. Yes, I’ll bring them all back to this place and let them live here in peace. They will be my people, I will be their God. I’ll make them of one mind and heart, always honoring me, so that they can live good and whole lives, they and their children after them. What’s more, I’ll make a covenant with them that will last forever, a covenant to stick with them no matter what, and work for their good. I’ll fill their hearts with a deep respect for me so they’ll not even think of turning away from me.“Oh how I’ll rejoice in them! Oh how I’ll delight in doing good things for them! Heart and soul, I’ll plant them in this country and keep them here!‘

He asked them the questions and gave a blessing. The choir sang “The Lord is My Shepherd, I Shall Not Want“, led by Father Suderman.” After congratulations and good wishes a lunch was served consisting of Zwiebach, cookies and coffee. Supper was served later to more than 100 people…boiled ham, pluma moose, rice, rye bread, butter, zweibach, cake and coffee. At midnight the last ones left. Gerhard harnessed two white horses to the top buggy to fix up a few things in their new home, while the bride, Anna, cleaned the mud tracked in during the wedding. Gerhard came back that evening and announced, “I think tomorrow we will move.” The next morning wedding presents, bedding, an old stove and some chickens were loaded up. Father Loewen tied the cow-gift to one of the horses. And so began a 50 year journey together – bring both sadness and joy – filled with faith.

Gerhard and Anna Suderman welcomed their daughter, Anna Daisy, July 4th, 1907. Anna was a child filled with wonder and faith. She chose a Morning Star from the sky, and continued to search for it every evening throughout her life. While attending Tabor College, she met Herman Bennie Siemens. On May 22, 1928, the two were joined in marriage. Anna Daisy sewed her wedding dress, and placed rows and rows of bugle beads, each attached individually. A faded picture of Herman and Anna standing behind a huge wedding cake testifies to the preparations for the wedding.

Jacob and Justina Loewen were the seventh couple married in the Ebenfeld Mennonite Church east of Hillsboro Kansas. Herman and Anna’s wedding was solemnized in the same church. Herman and Anna Daisy Siemens enjoyed the celebration of their 50th anniversary in 1978. They gave thanks for the added year of marriage before they were separated in death.

Herman and Anna’s oldest daughter, Emily, was born in 1929. When it came time to prepare for the wedding, Anna painted tall oil cans white with added sparkles to hold flowers. The wedding dress was made by Anna. This time Emily sewed rows of bugle beads from her mother’s wedding dress and attached them to her white satin and lace wedding dress that her Mother made. The groom’s cake, a heart shaped cake, was made by Anna Daisy, Emily’s mother. The wedding was small, attended by family. Grandmother Suderman came to celebrate. She made borscht soup for the evening meal prior to the wedding. Edgar Frank Combs and Emily Ann Siemens were married February 1, 1952, by Paul Hesser. They have celebrated their 56th Anniversary. They welcomed four children to their family. Their only daughter, Anna, met her husband-to-be in New Mexico.

Anna Kathleen Combs was married to Thomas Brent Payne on the 22nd of December, 1979. Again preparations included white daisies and yellow roses, invitations, and a dress? Anna wore her mother’s wedding dress with the bugle bead from her grandmother’s wedding dress. Anna’s brother, Tim, sang a song from Philippians 1 that Anna wrote. The wedding was performed by Jon McFarland in Rogers, Arkansas.

What is love? From generation to generation, faith hope and love, and the greatest of these is love.

Commitment, a willingness to serve from the heart, and understanding of what love is about as described in I Corinthians 13.
Love never gives up. Love cares more for others than for self. Love doesn’t want what it doesn’t have. Love doesn’t strut, Doesn’t have a swelled head, Doesn’t force itself on others, Isn’t always “me first,” Doesn’t fly off the handle, Doesn’t keep score of the sins of others, Doesn’t revel when others grovel, Takes pleasure in the flowering of truth, Puts up with anything, Trusts God always, Always looks for the best, Never looks back, But keeps going to the end. (The Message) Comments? eacombs@gmail.com