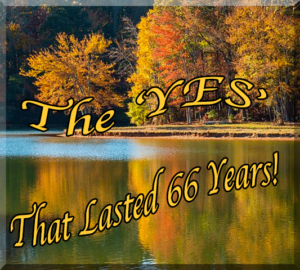 The question is, what was your proposal like? My first proposal of marriage had no sweet words or tender moments. The cation was in the kitchen one Saturday night at Midwest Christian College.  I noticed potatoes rotting in the bottom of the pantry.  I decided I needed to clean.

Suddenly, I heard a voice speaking to me.  I turned and saw a fellow student standing outside the open window asking, “Will you marry me!”

The second proposal came as my Frank, later Ed, whom I met during a revival meeting in Grenola, Kansas.  He drove me to Valley Center, KS, to another revival meeting. Suddenly he pulled off the highway and parked the car by a beautiful river.  It was a warm day in November.

I looked at Frank’s hands on the steering wheel, as he parked the car.  His hands were strong and yet seemed so gentle.

I didn’t say anything as he turned the ignition off.  He turned toward me and said, “I want to ask you a question.” I smiled, as he proceeded to ask me to marry him.  I noticed his nose was running. Frank, always allergic to many things, often had a runny nose.

I simply said, “I will give you my answer after you blow your nose.” He pulled his handkerchief from his pocket and blew his nose. I waited until he finished and answered, “Yes, I will marry you!”  We faded into the Hallmark Embrace as all good love stories do.

Little did I know that the terse answer to his proposal would last sixty-six years, through the loss of three children, and raising four.  Truly this marriage was in sickness and health, rich and poor, until death would separate us.

So many changes and so many, “I love you’s”, were shared together. His faith remained steadfast in Jesus Christ.  I often found him reading his Bible. He served as an elder, and caring for others always seemed to be his joy.

During his last seven years, the Lewy Body Dementia gradually erased his memory. When I no longer could care for him at home, we placed him in a nursing home. Soon he didn’t remember we were married.  One day he wanted to visit with his wife.  I used my cell phone and called the land line, and handed him the phone, and left the room, and then we visited by phone.  He no longer remembered our children.

Gradually his sight left him and the ability to walk or feed himself.  I continued to visit Ed and we listened to hymns and we talked about the beauty of our new Home in Heaven. We prayed together – this time was an interlude of peace and joy for both of us. 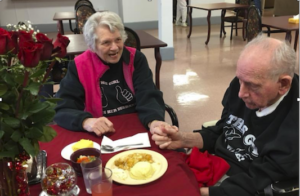 Then on February 1st, 2018, we celebrated our Sixty-Sixth Anniversary, after a dental appointment.  When we returned to the nursing home, there was a surprise awaiting us.  Such a sweet gift.  The staff provided roses, and a tablecloth, and a special dessert for Ed. This was almost two months before he died.

Ed had one last gift of love to give me. Three weeks before he died, he asked if I had everything I needed.  I assured him I did.  He nodded happily and replied, “I always wanted to take care of you.”  Then he added, “I always feel better when you are close.”