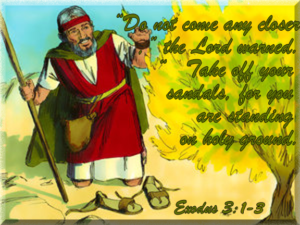 One day Moses was tending the flock of his father-in-law, Jethro, the priest of Midian. He led the flock far into the wilderness and came to Sinai, the mountain of God. There the angel of the Lord appeared to him in a blazing fire from the middle of a bush. Moses stared in amazement. Though the bush was engulfed in flames, it didn’t burn up. “This is amazing,” Moses said to himself. “Why isn’t that bush burning up? I must go see it.” Exodus 3:1-3.

Moses began his usual day, herding his father-in-law sheep near to the Mountain of God, Sinai.  Little did Moses know that one day he would spend time on Mount Sinai, receiving the tablets with the ten commandments here.  Moses’ curiosity rose when he saw something unusual – a bush burned and remained a bush.

Moses moved closer. He heard the voice of God calling him. He obeyed God, hid his face and removed his sandals.  There is one thing Moses did not do.  He did not run away.  He was God’s man, all the way.

God asked Moses and Aaron to go before the Pharaoh of Egypt to free the Children of Israel from slavery. Then followed the ten plagues brought upon the Egyptian people – water turns to blood, frogs, biting insects, boils, fiery hail, locusts, darkness and death of firstborn.  Moses led God’s people across the Red Sea on a dry path escaping Pharoah’s soldiers.  Then followed a forty-year journey in the wilderness with complaining people.

Each step of the way – God was with Moses!  Why am I discouraged? Why is my heart so sad? I will put my hope in God! I will praise him again—my Savior and my God!  Psalm 43:5

When the Lord saw Moses coming to take a closer look, God called to him from the middle of the bush, “Moses! Moses!” “Here I am!” Moses replied. “Do not come any closer,” the Lord warned. “Take off your sandals, for you are standing on holy ground. I am the God of your father—the God of Abraham, the God of Isaac, and the God of Jacob.” When Moses heard this, he covered his face because he was afraid to look at God. Exodus 3:5-6.