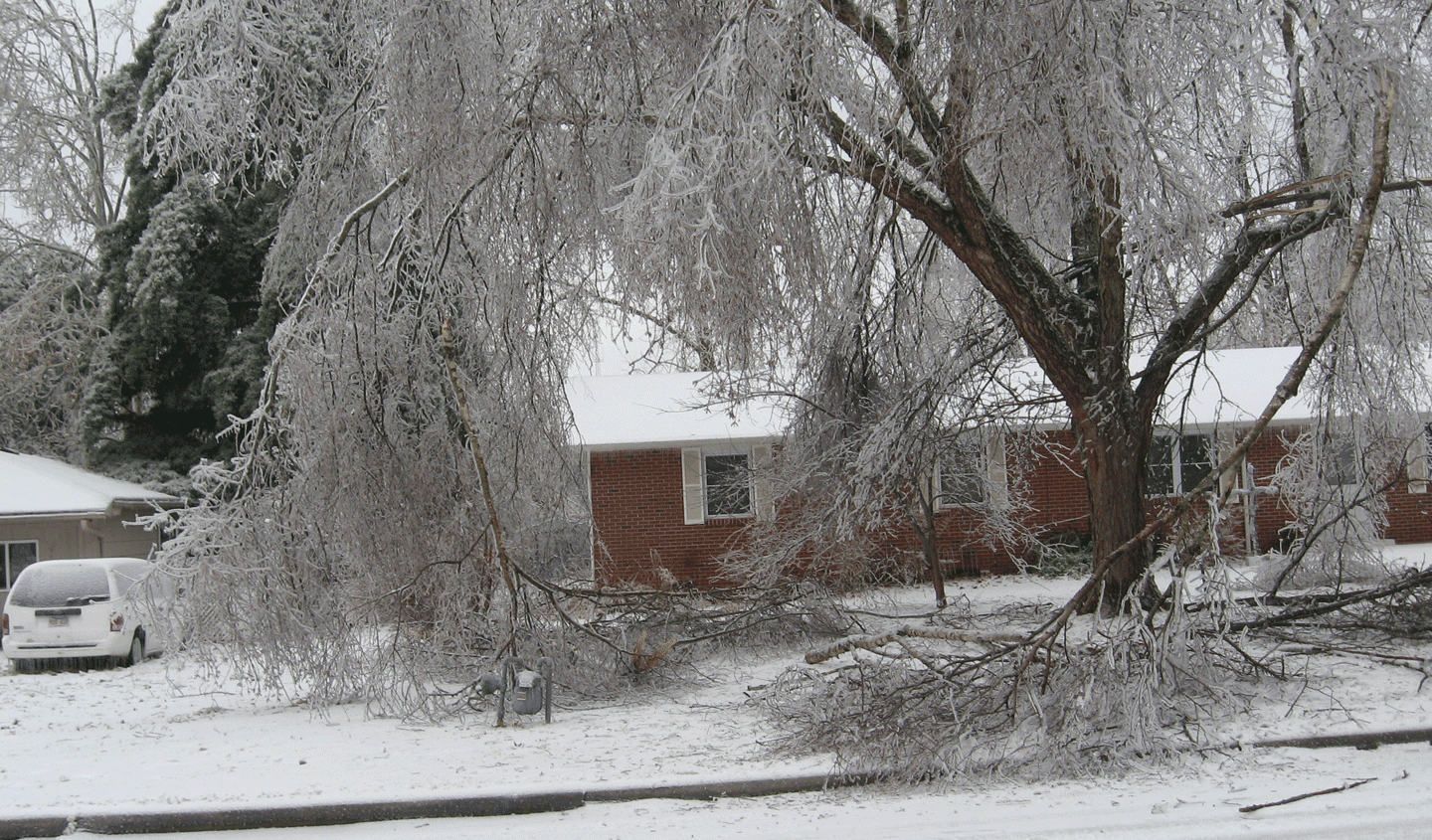 After the fierce ice storm in our area of Northwest Arkansas, I searched for ‘ice’ on biblegateway.com. And there are the words that stir men to ask, “What is God teaching us?” “What is He saying to us?” Job 37:1-13.

On Monday, January 26th, the Weather Forecasts were similar – warning of the impending severe ice storm. One lady counseled, ‘Just pray that it goes around us.’ It didn’t. It hit full force. Icy rain caused 24 inch long icicles from our roof and swelling of the icy limbs and branches. Tuesday morning our neighbor across the street brought hot biscuits and gravy. Their good deed was much appreciated. Their power went off an hour later.

We saw children playing outside in the ice. The mail was delivered every day of the bad weather.

A limb hit the back porch roof Tuesday afternoon and two limbs pierced through like sharp knives. Tuesday evening, man’s power stopped and God’s power continued. We wondered what the evening would hold for us.

Tuesday night we heard house-shaking booms as limbs hit the ground or our home. In the darkness, the unknown became more frightening. We prayed that no other limbs would create havoc on our roof.

As the house grew colder and we found heat only in the number of clothes we put on and passing our hands over the candle’s flame. Because our house is well insulated, even though the temperature dropped to 16 degrees outside, our temperature stayed at 49 or above.

Wednesday morning it was silent outside. I leaned over a thermometer in my bedroom and laughed to see an icy fog of expelled breath in the air. Daylight brought a wonderland of white. Snow had fallen on the ice – creating more weight on the limbs. More fell. Our front and back yards were filled with huge limbs.

On the kitchen table we placed the candles and burned them during the day. When I wanted to warm up my hands, I washed dishes from the hot water from the faucet (gas hot water heater). The dishwasher sat mutely – a monument to futility. Finally, I enjoyed washing dishes!

What a blessing that hot water heater became. It provided ‘hot’ coffee and tea, instant Lipton Chicken Noodle Soup, and ‘hot’ cereal. On Wednesday we drove carefully and slowly to pick up some medication and a few groceries — we found more candles and batteries, too.

The sunlight and clear blue skies set off the iced limbs etched against the blue. God’s beauty was not only in the ice cold air, but his power and love resided in the hearts of men who worked so diligently about us.

On Thursday night I watched the Esplundh trucks park on our street. In the dark, I saw 6 men tramping about in our snow/iced back yard, trimming the trees around power line. The next day we saw Electric Trucks on our street. Again, different men tramped through our yard. I began praying that the power would come on. And praying for the men who had come from different areas to work long hours in adverse conditions to restore our power. God answers prayer, and our power came on 71 hours and 50 minutes after it went off.

We ate out (unusual for us) two days – Thursday and Friday. Our children called to check on us from CA to WI to IL to GA. We were covered with love and encouragement. On Saturday afternoon, we napped, and were awakened to the sound of a chain saw. When we looked out the window, we gave God heartfelt thanks. The friend who cuts our grass in the summer began sawing and dragging the limbs to the curb. Such a sacrifice and service. I remembered that before we were blessed with electrical power, our ancestors lived without the heat we enjoy today. Compassion becomes foremost in men’s hearts when we struggle to survive in many different ways – whether it be environmentally, physically or emotionally. Let us be mindful of our Father in Heaven and give Him praise!

“Whenever this happens, my heart stops— I’m stunned, I can’t catch my breath.
Listen to it! Listen to his thunder, the rolling, rumbling thunder of his voice.
He lets loose his lightnings from horizon to horizon, lighting up the earth from pole to pole.
In their wake, the thunder echoes his voice, powerful and majestic.
He lets out all the stops, he holds nothing back. No one can mistake that voice—
His word thundering so wondrously, his mighty acts staggering our understanding.
He orders the snow, ‘Blanket the earth!’ and the rain, ‘Soak the whole countryside!’
No one can escape the weather—it’s there. And no one can escape from God.
Wild animals take shelter, crawling into their dens,
When blizzards roar out of the north and freezing rain crusts the land.
It’s God’s breath that forms the ice, it’s God’s breath that turns lakes and rivers solid.
And yes, it’s God who fills clouds with rainwater and hurls lightning from them every which way.
He puts them through their paces—first this way, then that— commands them to do what he says all over the world.
Whether for discipline or grace or extravagant love, He makes sure they make their mark.