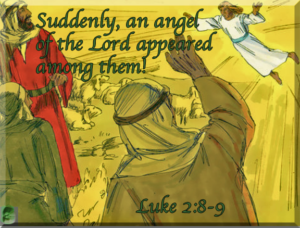 That night there were shepherds staying in the fields nearby, guarding their flocks of sheep. Suddenly, an angel of the Lord appeared among them, and the radiance of the Lord’s glory surrounded them. They were terrified. Luke 2:8-9.

Shepherds spent their lives protecting and guarding sheep.  Why are the shepherds the first to hear about the birth of Jesus?  At first, they must have wondered if the angels meant harm to their sheep.  Their caring nature shifted from terror to elation, and they wanted others to know when they listened to the angels.

The shepherds didn’t sigh a breath of relief when the angels returned to heaven.  No, they were eager to see the share the Good News with others the Lord had told them.  They were eager to worship the Wonderful Counselor, Mighty God, Everlasting Father, Prince of Peace, foretold by Isaiah, the prophet.

In John 10:11, it is written,  “I am the good shepherd. The good shepherd sacrifices his life for the sheep.  Earlier, the Psalmist David wrote, The Lord is my shepherd; I have all that I need.  He lets me rest in green meadows;  He leads me beside peaceful streams. He renews my strength. He guides me along right paths, bringing honor to his name. Even when I walk through the darkest valley, I will not be afraid, for you are close beside me. Your rod and your staff protect and comfort me.

When the angels had returned to heaven, the shepherds said to each other, “Let’s go to Bethlehem! Let’s see this thing that has happened, which the Lord has told us about.” They hurried to the village and found Mary and Joseph. And there was the baby, lying in the manger. After seeing Him, the shepherds told everyone what had happened and what the angel had said to them about this Child. Luke 2:15-17.