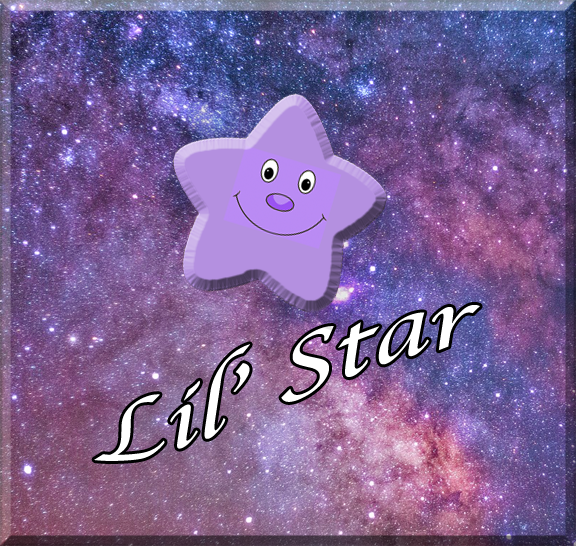 The Littlest Star appeared one night in the sky.  He hid behind the bigger stars.  Years passed, the littlest star, known as Lil’ Star, never grew up.  He may have been tiny, but his voice was as big as a giant kite.
The Lil Star raced across the night sky singing his song, “Do you see what I see?”
One night a huge star shone in the night sky.  No one noticed the Lil’ Star dancing across the sky that night, following the biggest star ever.
The Lil’ Star saw a donkey, led by a handsome man. The donkey walked carefully for he carried a beautiful young lady.  Lil’ Star looked again, and noticed she was very weary, and expecting a baby soon.
“Do you see what I see?” sang Lil’ Star. He heard the man say, “We are almost to Bethlehem.  We will find a room where we can rest.”
Mary answered, “Thank you, Joseph.  I know you feel tired, too.  We have traveled many miles.”
Lil’ Star looked.  He could see Bethlehem was not far away.  He rejoiced for Joseph and Mary as they neared the end of their journey.
Lil’ Star clapped his hands in joy as they reached the Inn. Lil’ Star sang his song, “Do you see what I see?”  When Lil’ Star saw the Inn Keeper shake his head and point, he moved closer.
Then Lil’ Star heard the Inn Keeper say, “There is no room in the inn, but there is room in the stable.”  Joseph led Mary to the stable.
And Baby Jesus was born.  Lil’ Star heard the sweet sounds of a new baby and changed his song, “Do you hear what I hear?”
The angelic light appeared as the Heavens burst open and Lil’ Star heard the Angels sing, Glory to God in the highest, and on earth, peace among those with whom He is pleased.
Lil’ Star wondered if he was the only one who could hear the angels. Then he saw shepherds in the field listening, too.  Lil’ Star sang, “Do you see what I see?” as he watched the shepherds going to Bethlehem to see Jesus.
Lil’ Star watched and thought of their joy in seeing the Messiah, the baby Jesus, lying in the manger.  No one noticed Lil’ Star as he darted between the stars following the shepherds. The shepherds remembered all the prophets had told about Jesus in the scriptures.
Lil’ Star sang, “Do you hear what I hear?”  After worshipping Baby Jesus, the shepherds left and told everyone they met what they had seen.  Lil’ Star watched Mary as she thought about all the things happening that night.  Lil’ Star heard Mary sing a new song, “Do you know what I know?”  Lil’ Star wondered if there would be an end to the story of Jesus.  What could all this mean?
Eight days later, Lil’ Star watched as Joseph and Mary took Baby Jesus to the temple.  There Simeon met them and took Jesus into his arms. Then Simeon, an old man, said, “Sovereign Lord, now let your servant die in peace, as you have promised.  I have seen your salvation, which you have prepared for all people.  He is a light to reveal God to the nations, and He is the glory of your people Israel!”  Luke 2:29-32.
Lil’ Star sang, “Do you hear what I hear?” And so it is, the Joy of the World came to earth. Each time someone hears the story of Jesus, to this day, Lil’ Star sings, “Do you See, Do you Hear, Do you Know? What I have seen, heard and know?”
Lil’ Star continues to dance across the sky, praising Jesus.  Tears filled his eyes when he saw Jesus crucified.  He scooted across the sky when Jesus rose from the dead.  He did a somersault when Jesus returned to Heaven on a cloud.
To this day, Lil’ Star continues to sing his song when he sees someone hear about Jesus and loves Him. Lil’ Star wishes he were bigger, yet his song reminds us to wait and watch for Jesus!
If you are still and listen on a starry night, you will see, and you will hear Lil’ Star singing, “Do you see what I see?”