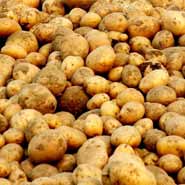 Separation. Such an interesting word. Synonyms are difference, gulf, chasm or a dividing line. In this day of politically correct inclusiveness, these separation synonyms roll over us. As I consider the word separation, I remember some of my earlier experiences with separation.

The earliest memory was the potato harvest. Since Mom and Dad always had a garden, owned a cow and chickens – we lived on a mini-farm in the middle of our town. Even in the midst of the devastating results of rationing of butter and eggs and meet of World War II, we were blessed with milk that had to have the cream separated from the milk, the chickens were separated by a fence to keep out marauding animals.

But the day came when I was about 8 or 9 years old when I learned the burden of separation. This was the year when we had an abundance of potatoes. Mom led me outside in the backyard, motioned toward the mountain of potatoes under the huge elm tree, “Suzie, I want you to sort the potatoes.” Immediately I could see that decision-making, and the enormity of the job was a crushing task. I asked, “How do you want me to sort them?” Mother’s reply didn’t help — “the large from the small”. I gazed again at that pile of potatoes that seemed to grow even larger. I felt just like I did in school when the teacher assigned a page of 50 problems. Overwhelmed. Then as I considered the task before me, I wondered — how big is big, and how little is little, and what about the in-between sized potatoes? Somehow I finished the task, and Mom was merciful when she saw the sorting result. I felt ‘decisioned-out’.

When I was sixteen years old, we moved 50 miles north from Clinton. I left my best friend Gladys Barrett, our church home, and all the other ‘home’ places. And all my friends. After a month or so, after cajoling our parents to go back to Clinton, I found Clinton to be the strange place….not Watonga. On the way home we assured our parents that we were strangers in Clinton now and we didn’t need to go back. Separation meant new beginnings, new friends and new ‘home’ places.

When it came time to go to college, I embraced being grown up, leaving home and living in a new environment. I was not to come home by bus (no cars in those days for graduation presents) for six weeks. On the 5th week, all I could think about was home and all it meant. Tears came, my stomach was tied into knots, twisting with emotion. I remember the call home on the pay phone in the dorm. I stood there and heard Mom’s voice and my tears flowed freely. She stayed firm, “Only two more weeks, Suzie, just two more weeks. You can do it.” I am thankful for her strength, even today. For I learned that nothing on this earth is forever, and I found that I could keep home in my heart and soon I was able to go several months without visiting home.

When I was 19, I traveled to a summer camp to work in the kitchen, near Cedar Lake, IL. I made a few mistakes, like forgetting to call the punch that I served at lunch, punch, or juice. Instead I used the kitchen’s term as I sweetly asked a man dressed in immaculate apparel, “Would you care for more bug juice?”

But the separation that I understood, but obviously my friend didn’t. The Cook motioned toward a dozen of eggs and asked my friend to separate them. She looked puzzled as I went to do another task, coming back to witness the result of the ‘separation’ – on the counter were two groups of eggs – six in one group and six in another group. The Cook’s face, as she came back to witness the ‘separation’ was priceless and speechless. I thought about the many ways my friend might have separated the eggs – by color, by the bumps, by large/small, besides separating the egg whites from the yokes.

As I searched the scripture, I saw that God deals in separation in the creation. For example:
God saw that the light was good, and He separated the light from the darkness. Genesis 1:4

Man can choose to separate himself from others and from God. This is a decision-making process and we are free to choose. But the consequences are often separation from those we love that causes a chasm, a gulf and a dividing line.

When a family separates, whether it is a new marriage, divorce, travel, service in a war, or in death, there is a sorrow and pain. The homesickness, the twisting of the stomach and the mind begins for what ‘was’. Today we have the miracle of internet to not having to say goodbye. Before, in the early 19th century and earlier, a good bye could be forever. Those who emigrated to this country, or those who ‘went west’ and waited for the pony express to deliver a message experienced uncertainty about their loved ones. Instant internet knowledge takes away our ability to exercise faith in Christ and trust while on our knees praying for them.

After death do we ever meet again? Is this death a final separation? No!
Neither height nor depth, nor anything else in all creation, will be able to separate us from the love of God that is in Christ Jesus our Lord. Romans 8:39.

How can we be sure that we will not be separated from our Lord, even in death?

When? No man knows the day and the hour, but we are to watch and pray, being faithful, trusting and give thanks in all things. 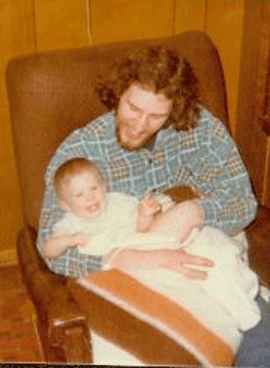 Separation can cross generations. A grandparent’s love for his grandchildren crosses time and generations. Even when the grandchildren don’t realize the depth of love, it is there. When Grandpa Rufus Edgar Combs died, our son Paul wrote about his Grandpa. Although Grandpa’s eyes could hardly see who was at the door, Paul, his wife and baby daughter, Sarah, were invited in for a visit quickly when Paul let him know who he was. That visit erased the sting of separation he had always felt from the man who had difficulty in expressing love.

Although Pappy argued that we should spend the night, I explained to him that I had to be at work the next day, bright and early. “Well, okay.” He said with a bit of sadness in his voice. “Just remember you’re always welcome. And you can always call, or write. I always want to hear from you. I’m always interested in you. You know that, don’t you?” “Yes.” I said. I reached out and shook his wrinkled hand. He gave a firm handshake that spoke of a love that I had never realized was there before. I felt emotion rising in my throat, and my face felt flushed. It was hard to leave. “You take care of that baby, now. You hear?” He said as we walked out the door. My heart was light and I felt like I had make a new friend. We wrote a few letters, back and forth after that. Then I didn’t hear from him. He wasn’t feeling very good. It was just a year and half later I was living in northern Minnesota when my Dad called. “I have some bad news,” he said. I knew what he meant before he said it. “Pappy’s passed away.” I thought of him standing at the door, not really seeing me wave goodbye to him. But he waved at me as I drove away. Now he was gone. A few weeks later, I received a message from Pappy. He had typed it out on his typewriter to be sent to all his grandchildren after he 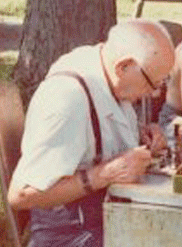 died. To all my Grand Children, Grandpa is not here anymore, he has gone across to that Golden Shore to be with Christ forever more. God has promised and I know it is true, that he will make all things new. A Children’s Home it will include, where you may come, and not intrude. My Eyes and Ears can see, and hear, and never fail, throughout the year. A perfect home where all may come, a home up there for every one, to last through all eternity. If along life’s way, you are doing good, and loving people like you should You will reach that Goal, and hear that word, Well Done. Of this Ditty you may make, and let whoever will partake. The date of this is some time in the future, but some time in the future, I won’t be able to write. Today is September 11, 1974

To read all of Paul’s tribute to his grandfather go to: http://apayne.com/totallypaul/pappy.html