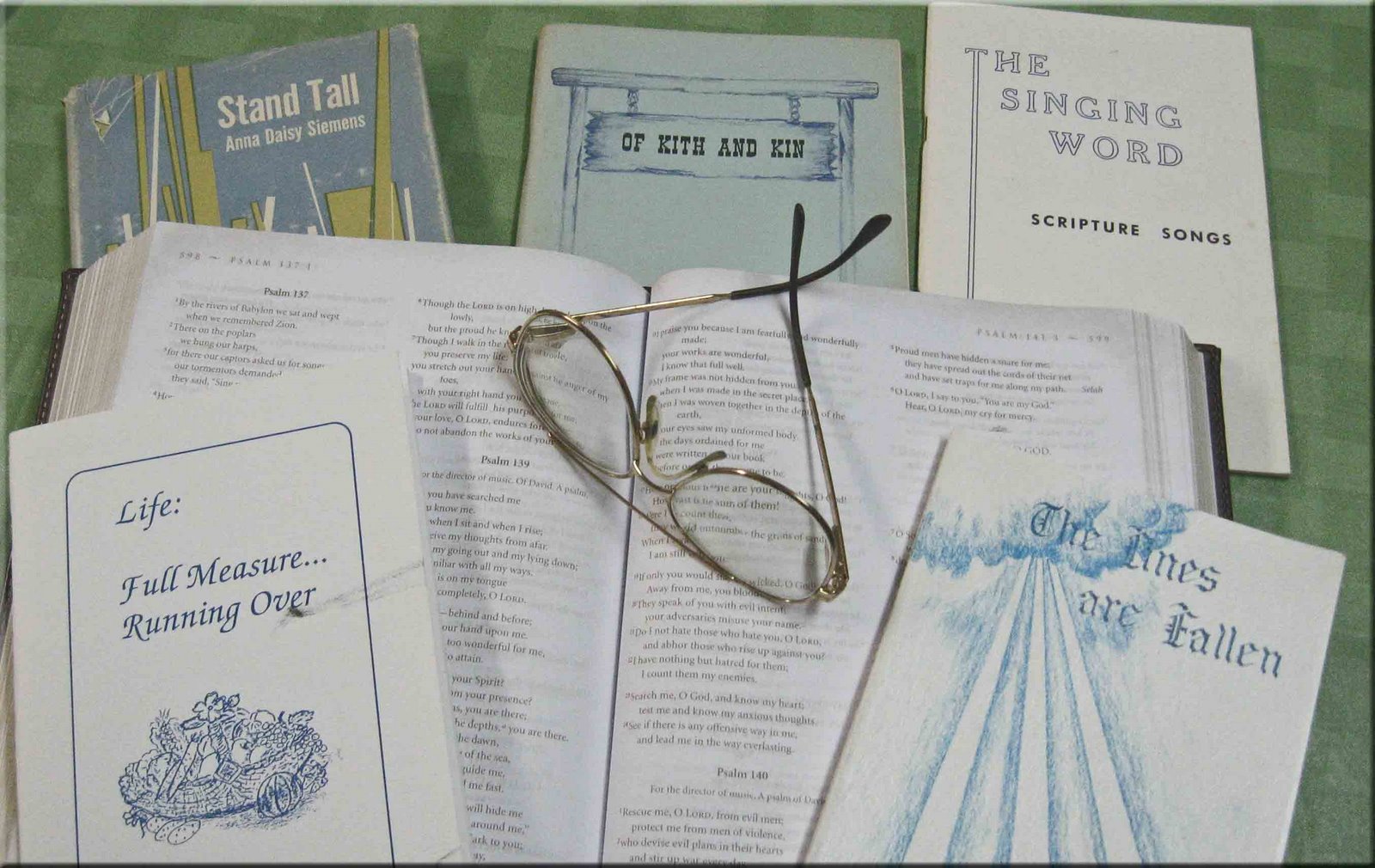 Anna Daisy (Suderman) Siemens (Mother) said to her daughter, “Susie, that was an inadvertent statement.” After a discussion young Susie understood that she had inadvertently commented to her mother a statement that was misconstrued.

Anna Daisy had a love affair with words. While her daughter (me) blithely learned Latin, struggled with French. Anna Daisy found obscure words and used them often until they were hers. She loved to do crossword puzzles and in her writing meticulously substituted words until she attained a word with a fitting rhythm, sound or meaning. Ill-chosen words could distort the purpose of the entire writing – and compell the collapse of the strength of the verbose discourse.

What is the result of Anna’s love of words? There are many. There were the ‘on-target’ results of publication and awards, or a continuous love affair with wordology. (not a word – I am sure there is a larger word for wordology).
1. Closer listening to determine the meaning
2. A larger vocabulary
3. Interest in history of words and their evolution of meaning
4. Amusing confusion of children as they hear unusual words in familiar places
5. Creating an interest in off-spring (children) who also become enamored with words.
6. Teaching students of various ages the art of writing poetry in workshops.

Mother gave this gift of the love of words through her quest for better writing. Her oldest grandson, Dan, kept an open dictionary on the floor by his bed during his high school years, and he consulted it often. Dan learned French in high school and learned the obscure language – Esperanto – on his own.

Dan’s brothers and sister have a penchant and adroitness in the use of words and have written often in various formats. Another grandson, Matt, became a talented debater, winning many awards during highschool and college.

What was the foundation of Anna Daisy’s interest in words? Her tremendous faith in God and the determination to witness that faith. She spoke Plautt Dietch, coming from the heritage of a group of people, the Mennonites, who came to this country for the freedom of worship in the 1800’s. Anna’s determination and understanding of God’s Word demanded that she witness her faith. She accomplished this in writing the history of her family, a file cabinet of poetry, articles and stories. There is but a short step from the rhythm and flow of words to music. One of her passions included writing Scripture Songs, singing her faith. She often wrote an 8th note beside scripture verses that ‘sang’ to her.

The picture above shows the foundation of her, the Bible, and the books she self-published during her later years. She once reminded me of the words of Solomon – Ecclesiastes 12:11-13

The words of the wise prod us to live well. They’re like nails hammered home, holding life together. They are given by God, the one Shepherd. But regarding anything beyond this, dear friend, go easy. There’s no end to the publishing of books, and constant study wears you out so you’re no good for anything else. The last and final word is this: Fear God. Do what he tells you.

One of Mother’s poems illustrates her lifelong journey with Jesus Christ, the foundation of her life.

Precious Presence, we are kneeling Wearied of earth’s emptiness Feed and fill us with your power As we strive for holiness Let us walk to gain perfection, More like Christ in every way, Till we stand in joy before you On that great and glorious way.