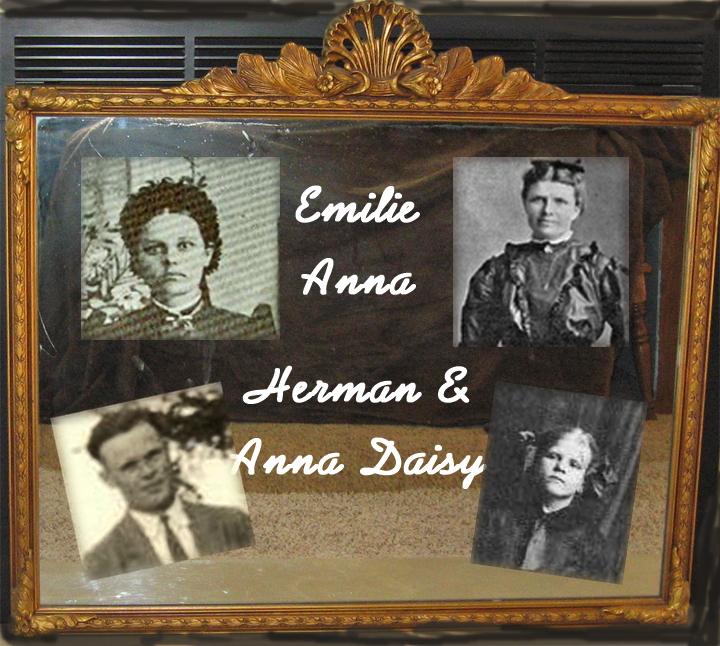 The heavy mirror hung on the protesting wall, crowned with a patina of golden-hued frame. For years it had been a part of my life over the mantel, then over the piano in Oklahoma and then in Arkansas. Now it is packed away, and yet its reflected memories reside inside, if I look closely.

In the mirror I see two women holding hands, laughing, and walking among the flowers in a field. Their images are faint, and the serious one, Emilie, has long thick black hair. the other, laughing Anna, has curly blonde hair.


At their feet I see two children at play. The black-haired boy, Herman, is teasing the blonde, sturdy farm girl named Anna. I try to place the setting in my mind for these two women. They were matrons then busily attending to the affairs of the day in two different states. They didn’t know each other, and yet their lives would become entwined in love as their children, Herman and Anna gave their vows of love. Emilie’s hair, black and Anna’s hair, blonde, were always worn in a tight bun at the back of their heads as was proper in their day. Did they let down their hair each night as they slept?


As I view this tableau reflected in the mirror, I look for truth. I know that these four people no longer walk on this earth. I know that they had a strong influence on my life. I close my eyes in wonder and look again. A rolling ocean tossing a splintered vessel to and fro comes into view. A younger black-haired maiden stood on deck. She is wearing a black wool embroidered shawl around her shoulders to protect against the damp wind. Her dark brown eyes are wide in fright. I want to reach out and comfort this young lass who fears for her life as she travels from Russia to United States. Then the wind subsides…


The scene fades and a field of green wheat appears in the mirror and reflects the flatness of Kansas. The blonde woman, newly married, continues to snip wrapping paper into lace-like curtains to hang in the windows of the small and dirty shack. She cleaned the floor, walls and ceiling with lye soap and scrub brushes. This home was was not as clean or spacious as the five bedroom family home Anna left. Love made it home even as crevices were closed against the field mice that wanted to move in. When the skunk moved under the floor, she insisted on moving to a nearby home, more spacious. A tax assessor came, and Anna wrote in her journal – “we owned two horses, one cow, a wagon, a top buggy and a sulky plow. Maybe he thought we could not make it, but we did.”

These two ladies would be much loved and called blessed throughout their lives on earth. Emilie would bear six children and raise five, four sons and one daughter. She will work hard each day, constantly praising God. There will be sixteen grandchildren who love her. I am one. She would care for her beloved Jacob who becomes paralyzed and spend his last years unable to move. He was no longer able to as a traveling evangelist. Emilie never learned to converse in English, using instead, her native Plautt Dietch. Her communication easily crossed any language barrier with her love for her sixteen grandchildren. Her delight at Christmas was to purchase 12 inch, 1 diameter candy canes for five cents each, enough for each of her grandchildren. She spent her last days following the news of World War II that was fought near her home in Saratov, Russia.
Anna bore ten children and raised six – four girls and two boys. One day each year she opened the wooden box that contained items of the four children she lost to mourn their loss and then she returned to the present, filled with love and thanksgiving for her family. She was never without her apron as she gathered eggs, worked in the garden, prepared meals, and sewed clothes for her children. She supported her husband’s desire to serve The Lord by leading the choir and spending much time learning new songs to praise The Lord. She served large noon meals in the summer heat for wheat harvesters, she taught her daughters to sew dresses and bake Zwieback (light 2-story rolls) that melted in the mouth. Though we lived a state away, Grandma Anna made every Christmas special with a gallon jar of peppernuts. Visits from our Suderman grandparents were heralded by much cleaning and baking.


Two women whose hearts were filled with love for their husbands, their children and grandchildren, and most of all their faith in God to order their days.


The mirror changed scenes again. As I watch the scene change, I see that the mirror has lost it’s luster. There are places that are worn, where the reflection had lost its glimmer. The mirror has faded its sharp reflection. How I long to hug my grandmothers and just know their presence once more. I want to know so much more from them now. I want to ask their thoughts and their counsel in this stage of life. I only know them in part.
Now I see children and grandchildren weeping as these two women, Emilie and Anna no longer walk on this earth, as neither do many of our loved ones. And I remember this verse of scripture that promises face-to-face vision.


For now we see only a reflection as in a mirror; then we shall see face to face. Now I know in part; then I shall know fully, even as I am fully known. I Corinthians 13:12


And the mirror reflection tells me, that though I see in part, I will see face to face. In the mirror, I see Herman and Anna working together day by day in the garden, at church, teaching piano, teaching the Word of God. I see Herman, Dad, gleefully chinning himself to show that he has not lost his strength when he was in his 50’s. I see Anna Daisy, Mother, trying and learning things and always daring to do more and take the challenge.


Now there is distance that separates families. Their presence is often missing from our circle, but never missing from our hearts. But when the ‘face to faceness’ is reality, and the Presence of God is known fully, there will be an unending reunion with a love that never falters or fails. When the mirror has become clear vision, with no reflections and we see our Lord ‘face to face’ and each other ‘heart to heart’. A clear heart-vision that is more revealing than the brightest sunlit day on earth is awaiting us.

Anyone
who listens to the word but does not do what it says is like someone
who looks at his face in a mirror.
James 1:23

This
is why I speak to them in parables: “Though
seeing, they do not see; though hearing, they do not hear or
understand. In them is fulfilled the prophecy of Isaiah: “‘You
will be ever hearing but never understanding; you will be ever seeing
but never perceiving. For this people’s heart has become calloused;
they hardly hear with their ears, and they have closed their eyes.
Otherwise they might see with their eyes, hear with their ears,
understand with their hearts and turn, and I would heal them.’
Matthew 13: 13-15