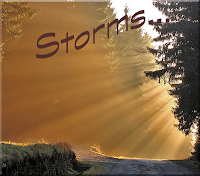 The sky darkened, clouds formed heavy with the wind pushing them in different directions. Then suddenly a deluge of rain dropped from the clouds. A storm. So many memories crowd in of the many storms in my life time when the wind becomes fierce and rattles the windows. I envisioned possible destruction and felt unrest and remembered Storms Past.

The snow storm in Clinton, OK. When morning came, the snow had drifted the front door shut. I remember Dad shoveling his way through the snow from the back door to the barn to care for the chickens and the cow. No school and Mom read us the Five Little Peppers and How They Grew.

We were a young couple with two small boys, on a farm in Central Kansas. Storm clouds threatened. On the farm we had a steel re-inforced concrete barn. Ed drove our car into the barn and we huddled most of the night in the car with two little boys who slept through the gales of wind that blew and beat on our safe concrete haven. The light of day showed us the damage that was evident in the few trees we had, other wise life went on as usual. We were prepared for the storm.

The tornado in Watonga, OK. We had just moved to Illinois and received a visit from the police telling us of the tornado that hit Mom and Dad’s house. When we visited the next summer, we saw an unbroken coke bottle that had been partially embedded in the tree in the south yard. The viciousness of the wind that my parents went through pierced my heart. In my mind, I could see them shivering in the Siemens Cellar next to the shelves of canned produce from the garden. I could see their clasped hands and hear their prayers and hymns they sang beneath the narrow kitchen table when the tornado circled back around. I could hear the growl of the wind finally die down and the splintering of wood.

In New Harmony, IN, our four preschool children watched the trees swaying in the wild wind through the windows. They were frightened because they had never experienced a wind storm. Ed and I thought the wind blowing was mild, for we were used to the 40 mph breezes of Dodge City, Kansas. Later our children took a 50 mph wind in stride when we moved there later.

One of our sons remembers watching for tornado in western Kansas. On the hillside of our 3 acre bit of land along Highway 54, just east of Fort Dodge. We watched the clouds, looking for a tornado tail that might drop down. We often had high winds and we learned to lean into the wind to keep our balance. Finally we decided to go to the basement. A good safe place. We took flashlights and and two bags of candy and were prepared to wait out the storm. Paul remembers the two sacks of hoarhound candy. It was an important ‘preparation’ for a 10 year old. Our two story house remained strong in the wind, and no tornado tails dipped down to scoop us up.

Perhaps the largest storm that Ed and I endured was the ice storm in Rogers AR, one winter in 2009. Then the power went off. We gathered candles, and layered clothes against the creeping cold. No heat or fire place warmed the air. We spent three days and two nights without power. I found a book that I had recently purchased, The Heavenly Man by Brother Yun. I shivered in the dark and read by candle light his true story of a different kind of storm, and even more chilling of how he desired to learn of Jesus in a land that denied God and denied the ownership of a Bible.

His true story touched my heart. His unconcern with physical comfort and safety in order to teach and preach Christ gave me strength to endure the cold.

Recently swarms of tornadoes surged through Oklahoma and Kansas leaving destruction in its vicious path through more states. The next morning we awakened to a blue cloudless sun-drenched world. The emerald green of the trees sparkled and the whole earth rejoiced about us.

Psalm 19:1-5 – The heavens declare the glory of God; the skies proclaim the work of his hands. Day after day they pour forth speech; night after night they reveal knowledge. They have no speech, they use no words; no sound is heard from them. Yet their voice goes out into all the earth, their words to the ends of the world. In the heavens God has pitched a tent for the sun.

Surely we will face other storms, but in the high wind and destruction our shelter of faith and trust grows…for God speaks in the storm. His voice thunders in the sky commanding our attention. But Jesus promises peace to the faithful.

John 14:27 – Peace I leave with you; my peace I give you. I do not give to you as the world gives. Do not let your hearts be troubled and do not be afraid.