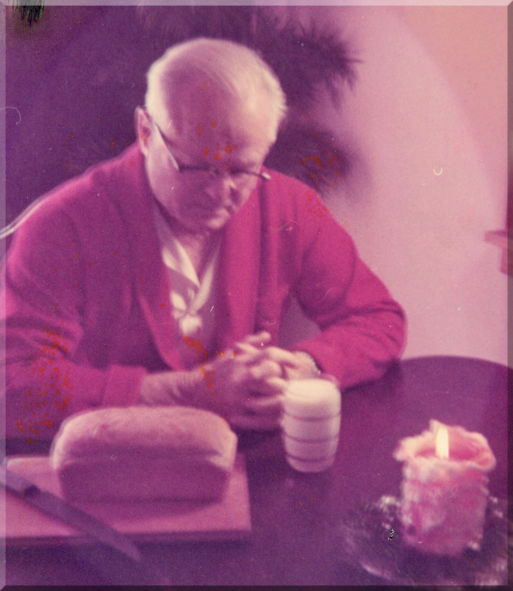 I can still hear my Dad’s voice saying this same prayer.. The prayer before the meal was …..Kumm Herr Jesu, sei unser Gast un segne uns, was du uns bescheret hast. Amen., (Come, Lord Jesus, be our Guest,  And bless what you have bestowed.)

Next, I would hear, “Please, pass the bread.” The thick slices of homemade bread was the staple of every meal. I can still see Dad’s eyes light up as he anticipated the taste-luxury of bread at every meal, as he thickly spread butter on the bread and homemade jelly. (A far cry from sorghum molasses when he was young)

Mother made the bread. She made Rugge Brot (Rye Bread), White Bread or whole wheat bread. I can still see Mother’s hands kneading bread on the floured wooden counter in our kitchen. Once I asked her why she hit the dough so hard. “To make it better.” Mother’s hands were adept at kneading bread, playing the piano, crocheting, sewing, and other activities. When I think of Mom, I think of her busy hands. 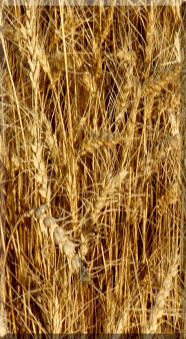 She knew there were many chores to do at home, and often told us the Little Red Hen story to motivate us. This story’s moral was that to contribute to an end product we deserved to enjoy the end product, or “if a man does not work, let him not eat”. http://en.wikipedia.org/wiki/The_Little_Red_Hen When the little Red Hen found the grain of wheat, and planted, harvested, milled the wheat and made it into bread. Then all wanted to eat. This story showed us the tedious journey from the wheat seed to the finished loaf of bread on the table and how we work together to eat.

Dad told us that during the World War I, wheat flour was needed to feed the soldiers, the white flour was taken and the flour left was the whole wheat. He realized later that the family was left with the healthy whole grain. He told us of driving a truck load of wheat to the mill in Oklahoma! There was a small hill on the way. Unless he ‘gunned’ the motor, he could not get to the top. Sometimes he had to made a three or four tries before cresting the small hill.

All of these thoughts, enveloped in the heavenly smell of baking bread from the kitchen, made questions surface in my mind. In this day and age, there are all kinds of breads to be purchased. The time becomes a priceless commodity when bread makers become a staple. What was the process of preparing bread long ago?

The children’s book – Turkey Red – by my Mom’s cousin, Esther Vogt, comes to mind. The red wheat seeds, carefully chosen in Russia and brought to America, became the future for the Mennonites of this country. Although second thoughts often came to their minds, yet, they persisted in freeing grass-bound prairie that became fields of waving grain. Then grain was cut with scythes and bound in bundles for harvest. In time came the steam engine and the combustible engine. Dad told about going into the fields at harvest time to tinker with the engines, to keep them going. A generation before his Dad did the same thing with the steam engined combine. I remember the steel lugged tractor, the tractor seat – with the driver open to the elements of weather. Then came the air conditioned cabs. A long way from the later 1870’s way of farming.

And just as the little red hen followed the grain each step of the way to the table, the Mennonite farmers did the same. From 1874 – immigration to United States – to the present, the acquisition of bread has taken many paths in the life of the Mennonite farmers. More than a hundred years – the history in the trek from Holland to West Prussia to Russia to America and ‘bought’ bread.

Such a treasure to read history coupled with food in the book, Mennonite Foods & Folkways from South Russia, Volume I by Norma Jost Voth. A book of delightful reading. The following are quotes from her book:

From Mom’s kitchen came verenika, many types of bread, peppernuts, cookies, bread pudding, pies – all made with flour. Dad loved the older bread, toasted, just before baking day. He poured a combination of postum and milk topped with sugar over his toasted bread.

From Norma Jost Voth’s book, comes this Breadmaking Blessing – The Lord has given us bread. Without it there is no life. As long as bread is in the cupboard, We need not fast. Lord, bless our bread, For then we have no need. The Father, Son and Holy Spirit.

As I read from Norma Jost Voth’s book, I understood Dad’s concern about having bread on the table and his delight in eating the bread…To him it was the bread of life and the Bible was his guide and the staff of life to him. Generations before Dad, our ancestors gave thanks for the crops that fed them.

Jesus understood the basis of life-giving bread and how it sustains physical life. He also knew we would understand and connect our need to not be hungry and make His Word our staple for eternal life in the following scripture.

Then Jesus declared, “I am the bread of life. He who comes to me will never go hungry, and he who believes in me will never be thirsty.” John 6:35

Even as I write, these words from Psalm 22:30-31 come to mind….Our children will also serve him.  Future generations will hear about the wonders of the Lord.  His righteous acts will be told to those not yet born. They will hear about everything he has done.