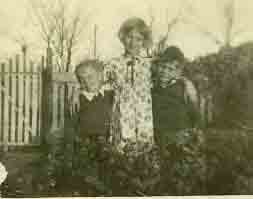 Growing up during the Great Depression could have been frightening. My world, as a child, centered in a small house, one living room, one bedroom and one kitchen/dining area. If you stood at the front door, you could see through to the back door. When my little brother, Gene, was born, Dad made a trundle bed that fit underneath Dad and Mom’s bed for Jim and me that was pulled out each night as part of the bedtime routine.

A Singer sewing machine sat in the bedroom that Mom used to sew clothes for her family and others. I don’t know how she managed, listening for baby Gene with Jim hanging on one side of her and me on the other side. The upright piano stood in the living room overshadowing anything else in the room. There were two wooden rockers that were mobile – determining which room they were to be used.
The kitchen contained a tall metal cabinet. The gas stove stood by the metal cabinet and across from that was the table. A bench was placed behind where Jim and Gene sat. Two wooden chairs were there for Dad and Mom and my place wa
s on the flour barrel. It was just right.
Outside, bordering the driveway were a row of poplar trees. I pretended they were giants and protected our home. They were watered with wash (laundry) water once a week. It was here I felt peace. I knew peace. I knew I secure and protected. Discipline gave us boundaries of behavior and added to the security. Mom tried to spank me once once when I was about four. I ran away. She pronounced the grim words, “When Dad comes home, he will do it.”
I cried. I went to the bathroom just off the kitchen and grabbed the razor strap and began whipping myself. Then I didn’t feel peace. I felt fear for I knew if Mom said, I would have a spanking. She didn’t listen to my tears, or accept my self-punishment. I suffered more. When I disobeyed in rebellion and torment stormed my mind, I tried to punish myself. I dreaded Dad’s home-coming and then facing Dad. I don’t remember the spanking. I only remember the shame for my actions, and knew that disobedience wasn’t worth it. I learned that lesson over and over….
I wondered if my ancestors had peace in their hearts. The genealogy tells the story of births and deaths, but accepting Jesus is not always included. This spiritual ‘birth’day gives peace for an eternity. As I read some of the happenings in the family, I wonder about their source of peace:
These ancestors lived a lifetime on this earth and questions arise. What kept their families together? What gave them hope as they traveled so far? When I think of the preparations and planning that it took to leave their homes, I am overwhelmed. How were they able to know what to pack? Young parents today fill the car with baby belongings to transport themselves for several hours, and it is overwhelming to think of the anxiety they may have felt….and yet their faith in Jesus remained steadfast.
If we had to uproot our lives as we know them it would be so difficult. The cost alone plus the fear of not being able to find a place to live for their families takes a great deal of faith and trust.
As they traveled by train and by boat for weeks, as they dealt with sickness and discomfort, did they know peace? In other writing of the Siemens family, I read, “We must know where we come from, if we want to know where we are going.” The underlying faith is in the person of Jesus Christ.
Who is this Jesus Christ that He gives hope and peace (Peace that passes understanding.) Only the presence of Jesus will give us true peace even in the midst of turmoil. For peace is not the absence of strife…it is the eternal hope to hold on to.
Peace is a Person? Yes. Ephesians 4:12-14a – remember that at that time you were separate from Christ, excluded from citizenship in Israel and foreigners to the covenants of the promise, without hope and without God in the world. But now in Christ Jesus you who once were far away have been brought near through the blood of Christ. For He himself is our Peace!
The path to Peace, the Person, is a process and an ongoing learning in our lives. May He be the Cornerstone of our Lives. John 14:6 – Jesus answered, “I am the way and the truth and the life. No one comes to the Father except through me.
As these people from long ago believed in Jesus and it gave them hope in overwhelming odds, I pray that my faith is strong in Jesus. Not only for my life, but as a testament to my children, grandchildren and great-grandchildren.
Prince of Peace by Michael W Smith…..
He is Lord of Lords
He is King of Kings
He is mighty God
Lord of everything

He’s the Alpha, Omega, Beginning and End
He’s my Savior, Messiah, Redeemer, and friend
He’s my Prince of Peace and I will live my life for you.