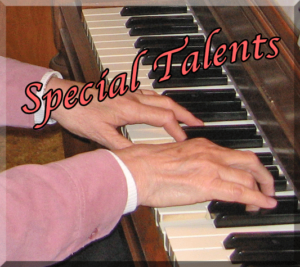 After completing almost nine decades of life, I have a long-range view of the phases of my life growing up.  Each day brought something new to wonder about and learn with many surprises. In Mother’s family, everyone wanted to learn music.  Mother sat in a summer-hot attic learning how to pluck a melody from an auto-harp.

Teaching me was not easy. She managed because her stubbornness outshone mine. I learned to read music and music has been a part of my life.

I gave up being an artist when I had no patience with watercolor paints. At the age of 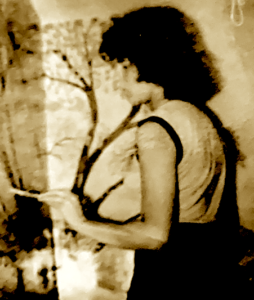 nine, my creation was a blob of brown, as the paint gathered as if they had a mind of their own.  Then Mother, yes, Mother again, suggested I spend some time when I came home from college to check the garage for leftover paints and paint a mural upstairs just outside of my bedroom.

Then 30 years later, someone suggested painting a series of murals in the Fellowship Hall. Here Laura and I painted scene after scene and enjoyed the painting stories.  Only because the Giver of Gifts made this possible.

I heard an opera singer and loved the idea of singing in another language. While washing dishes, I opened the window above the sink (my microphone), and, making up my own language, I proceeded to give a concert doing the supper dishes.

Mother noticed I ‘sharped’ and decided I needed lessons.  Out of college, I traveled and lead singing, taught children, and sang solos.  At the one funeral I remembered singing for, I stood behind a curtain, before me was the open casket.  Being summer, I saw a fly come buzzing by and landed on the body before me. I was used to waving flies away from my little children, and at the last minute refrained from putting my arm through the curtain and chasing the fly away.  I sang for many weddings and enjoyed the fun of bringing joy and solace through music. Is this a special talent?

When I taught my friends’ children piano, one boy, David, looked at me as I explained. The light of understanding filled his face. My Dad was right all along. I needed to teach.

My husband supporting me, I began teaching elementary music in Dodge City Central School. We moved to Collinsville IL, and they didn’t need a music teacher, and I learned to teach in the classroom. Then we moved to Rogers AR, and there I found a job teaching the sixth grade for over 20 years.  It was in the early 1980s, a parent gave me a computer. The principal one summer bought six Macs.  One day a week, I put away other textbooks, and I taught Basic Programming. Did I know how? No. I spent the summer before, learning basic programming. My students mastered the floppy disks and learned to do programs with detailed accuracy. Even special education students wrote page after page of programming. Was this a special talent? We worked at it as a team, learning together.

One day the one extension cord that connected all six computers was disconnected by someone tripping on the cord.  The outcry of the students’ programs that disappeared into ether-land was also a good lesson of how quickly electronic gadgets can quit.

Our children left home one by one, and married, and then came twelve grandchildren in faraway places. Ed and I began inviting the children of our church family home for Sunday dinner.

Then came the time caring for my mother in her last days. In 1986, my brothers came from Utah and California to help in the move from Oklahoma to Arkansas. I didn’t ‘retire’ until 1997, one year before Mother died.

One beautiful happening surprised me and renewed my faith in God. In 2004, a young girl came from another country, and not knowing Jesus, became my ‘sister in Christ Jesus’.  Through her beautiful new spiritual beginning, I began to grow in the Lord again. 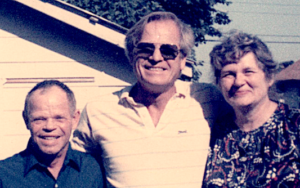 As I look back on my life, I can see that all the ‘special gifts’ I have received had their genesis in the heritage I was born in, the call to serve Him in many ways, and learn to see more ways than my own way. Death visited in 2007, my brother Jim, 2014, my son Dan, who helped us move to Illinois after Ed was diagnosed with Dementia two years earlier. In 2016, when my grandson Ben died, then in 2017, when my brother Gene died, and my husband Ed died in 2018. I learned to trust God for caring for them in Heaven. Now I see God’s Creation as His love, His strength, and His wisdom.

As the years pass by, I come back again and again to the Fruit of Spirit scripture. But the fruit of the Spirit is love, joy, peace, patience, kindness, goodness, faithfulness, gentleness, self-control; against such things, there is no law.  And those who belong to Christ Jesus have crucified the flesh with its passions and desires.  Galatians 5:22-24.

This fruit is the Special Gift I treasure. They come through the gift of grace.  Any talents I have, God has given me, ‘for such a time as this.’

The verse I learned so long ago began my longing for Jesus in my life. But as a child in the faith, I had to learn to follow in faith, often stumbling as a child learning to take his first steps.

“For God so loved the world, that he gave his only Son, that whoever believes in him should not perish but have eternal life.  For God did not send his Son into the world to condemn the world, but in order that the world might be saved through Him.” John 3:16-17.