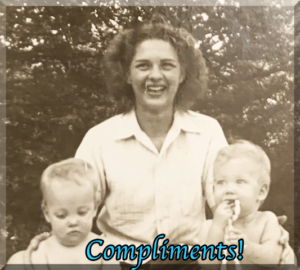 When I saw the question about an Unusual Compliment… a memory popped into my head! Finally, I made it to Junior High in Clinton, Oklahoma.  I have always wanted to be ‘old enough’ and never certain what that age could be.

As I walked onto the campus that day, I saw a group of girls in my grade.  I noticed they were having an animated conversation.  I walked up to them and asked, “What are you talking about?”

I waited as they rolled their eyes, anticipating something exciting about their conversation they would reveal. Finally, one girl answered me, “You are not old enough!”

That was not the answer I had waited for! I smiled, and said, “Oh, OK!”  They waited until I left, and then I saw them laughing…I wondered why I couldn’t join in. They were in my age group. I was puzzled. Years later, I figured out what had happened. They were talking about boys, and they thought I was too innocent.  Now I realize what a compliment they had given me.

Now I thank God for His protection that day…and realized what a compliment they had given me. God is good.  Four years before, I accepted Jesus as my Savior and was baptized.  And we know that for those who love God all things work together for good, for those who are called according to His purpose.  For those whom He foreknew he also predestined to be conformed to the image of his Son, in order that He might be the firstborn among many brothers. Romans 8:28-29.

Put on then, as God’s chosen ones, holy and beloved, compassionate hearts, kindness, humility, meekness, and patience, bearing with one another and, if one has a complaint against another, forgiving each other; as the Lord has forgiven you, so you also must forgive. Colossians 3:12-13.

Impossible?  Yes, it is impossible to be kind, humble, patient, and forgiving others on our own, yet with the Holy Spirit that dwells within us, cheering and guiding us on, it is possible!  I can do all things through him who strengthens me.  Philippians 4:13.

The best advice I know is when the Children of Israel faced certain death — by the hand of Egyptians or the Red Sea. And Moses said to the people, “Fear not, stand firm, and see the salvation of the Lord, which he will work for you today. For the Egyptians whom you see today, you shall never see again. The Lord will fight for you, and you have only to be silent.” Exodus 14:13-14.

Another time while teaching, and a parent asked other teachers if they taught Humanism. I remembered my classroom where I read a scripture each day.  My students became like family.  I saw the other teachers, rolling their eyes, motion to me, and said, I probably didn’t.  I decided I needed to learn what humanism is…

They knew I re-interpreted the Science book, when it taught evolution, I thought they needed another view, and read Genesis 1.  Then I suggested, they talk to their parents to find out which they should believe. One boy asked me when God was born.  I prayed for an answer, and finally quoted the first phrase, In the beginning, God. He always is, from the beginning. My students were an extension of my family.

Often, I stand alone, but standing alone is part of standing with our Lord and Savior. How do we stand with God?  We understand that our Identity is being His…and knowing what He commands that we do, to be His.  Second, choosing associates wisely, those who have faith in HIM. And the Third, is to Guard our Heart, just as Nehemiah had gate watchmen to guard the gates as they rebuilt the walls.

A compliment is to point out the appreciated strengths and talents of another person. They are not a weapon to play ‘gotcha’.

A compliment for me is a time when it humbles me, that God would be so kind and good, to give me this ability to use for Him.