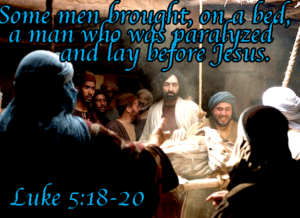 And behold, some men were bringing on a bed a man who was paralyzed, and they were seeking to bring him in and lay him before Jesus, but finding no way to bring him in, because of the crowd, they went up on the roof and let him down with his bed through the tiles into the midst before Jesus. And when he saw their faith, He said, “Man, your sins are forgiven you.” Luke 5:18-20.

How awesome is faith in Christ Jesus.  There was no doubt in the minds of the men of the power of Jesus. When they could not see Jesus by walking in the door, they went another way.  Would it have been easier to wait another day? No, they found another way – through the roof.  It was more difficult, who had a rope or did they use it to carry him? Jesus saw their determination of faith through their actions.

The Pharisees questioning Jesus about forgiving the paralyzed man’s sins, or saying “Rise and walk”?  This is a group of people who loved their friend and trusted Jesus to take him to the house. They solved the problem of seeing Jesus, climbing to the roof, making an opening to lower the paralyzed man.

Which is easier, to say, ‘Your sins are forgiven you,’ or to say, ‘Rise and walk’? But that you may know that the Son of Man has authority on earth to forgive sins”—he said to the man who was paralyzed—“I say to you, rise, pick up your bed and go home.” And immediately he rose up before them and picked up what he had been lying on and went home, glorifying God. Luke 5:23-25.