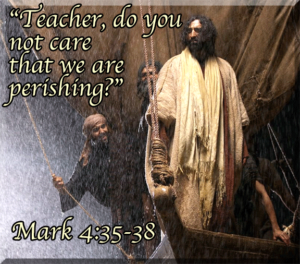 On that day, when evening had come, He said to them, “Let us go across to the other side.” And leaving the crowd, they took Him with them in the boat, just as He was. And other boats were with Him. And a great windstorm arose, and the waves were breaking into the boat so that the boat was already filling. But He was in the stern, asleep on the cushion. And they woke Him and said to Him, “Teacher, do you not care that we are perishing?” Mark 4:35-38.

Because Jesus is human as well as divine, He understood weariness we feel. Have you ever felt such bone weariness, you are able to fall asleep no matter how noisy it is around you?  This is how Jesus felt, as the sun fell over the water.  Can you hear the sound of the waves breaking against the ship?  He lay His head on the cushion in the boat and soon slept soundly.

What woke Jesus from His deep sleep?  Not the crashing waves, but the sound of His disciples.  Fear of the windstorm woke then up, and they awoke Jesus, “Don’t you care that we will die?”

Did the storm frighten Jesus?  The divine Jesus had created the wind, gathered the waters into a sea!  He stood and told the wind, “Peace! Be still!”  The wind instantly calmed and told the men, “Have you no faith?”  When we are afraid, Jesus cares, and when we have faith, He calms our fear and stills our storms!

And He awoke and rebuked the wind and said to the sea, “Peace! Be still!” And the wind ceased, and there was a great calm.  He said to them, “Why are you so afraid? Have you still no faith?” 41 And they were filled with great fear and said to one another, “Who then is this, that even the wind and the sea obey Him?” Mark 4:39-41.