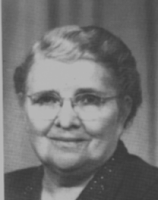 I love stories, and when it is true, it speaks to me. The ‘heroine’ of this true story came to visit. It was a time of preparation, excitement and joy. To my ‘child’ eyes I saw a lady of quiet smiles. I saw errant gray curls that framed her face. I anticipated her hugs to her ample bosom and especially the mysterious small brown sack of candy. How did she know? Never did I wonder about her life before her role as my beloved Grandmother. This then is a part of her story:

Anna Daisy looked out her bedroom south window at the farmyard as she dressed. “Alma, come look! The leaves are coming out on the trees and soon the peaches will be in bloom, too! I love spring!”

Alma looked out the window as she hurriedly dressed. “It is beautiful. God knows how to make such a beautiful day for us!”

The girls raced down the stairs. They were excited. No more cold weather to do chores in, and no more snow for a while. They hurried into the kitchen where Mama was beginning a fire in the wood cook stove.

“Girls, I think I will need more wood now so breakfast can be ready. Bring in the wood and do the chores!”

Anna looked at Alma and then they knew. This was not a good day for Mama. She didn’t hug them or say “Good Morning!”

“Yes, Mama,” they chorused. Their enthusiasm for the day dropped like the icy thermometer in January.

They rushed to the woodpile and picked up the heavy pieces of wood and back to the house. They did stop once, even when they noticed a robin tugging on a worm not too far away. Anna said, “Come, Alma, let’s go take the wood to Mama and do our other chores.”

Anna and Alma hurried back outside to complete chores, feeding and watering the chickens, checking for eggs and animals. As they worked Alma asked, “Anna, do you remember last year when Mama was so sad in the spring?”

“Yes, Alma. That is when Paulie drowned in the stock tank. Do you think that is what is happening now? Do you think Mama is remembering all her babies who have died?”

“Do you remember what a sweet baby Hilda was? She died when I was five years old. And then, Paul died in April when I was 9 years old last year.”

“Today will be Memory Box Day, Anna,” said Alma, “I know it helps Mama, but it is so hard.”

The girls finished the chores and entered the house quietly. After Papa gave the prayer for the meal, the meal was eaten quietly and quickly. After the kitchen was clean again, and the table cleared, Mama said, “Girls, it is time to get the Memory Box down from the closet shelf upstairs and the claw hammer from the kitchen. Could you do that, and bring it to Papa’s and my bedroom?”

Alma and Anna Daisy, faces solemn, brought the box to Mama. Mama was sitting in the rocking chair, holding her hands together. Her eyes were closed and she prayed inaudibly as the girls entered.

“Mama, here is the Memory Box and the claw hammer.”

“Thank you, girls, and I love you both so very much. This will be a time that we will remember your brothers and your sister who are living with the Lord.”

Slowly Mama pried open the wooden lid, the nails screeching as they released their hold on the memories. As Mama opened the box, tears coursed down her cheeks. She held up each article of clothing that God’s baby had worn. As Mama held them up, she told of the dreams and hopes for each child. She told of the tearful trips to the Ebenfeld cemetery with small white caskets that now held only their earthly bodies.

“Here is Daniel’s blue velvet suit. He was such a quick little boy, and brought his Papa such happiness. He was always eager to help Papa with the horse. Papa blamed himself when he let Daniel get the horse that day. We saw him, with the reign wrapped around his little wrist being dragged by the horse. Daniel was only with us for six years. He died just four months before you were born, Anna. Now our Daniel is with God.”

“This is Gerhard’s baby dress. He was only with us a short time. He was named after your Papa. One morning I noticed a red spot, caused by a spider bite. Papa said I was a good housekeeper and why would there be a spider in the cradle with Gerhard? Gerhard died of that spider bite. Gerhard was born two years before Alma was born. And then, Anna, you were born one year later. How we prayed that we could raise you both to adulthood.”

“I remember making Hilda’s cap, adding the white satin ribbons. I remember each of the featherstitches to hold the ribbons in place. I thanked God for Hilda. I had three girls then. Anna Daisy, you enjoyed watching Hilda and you were such good help when you were just four years old. But when Hilda was a year old, she died. We had to place her in the white casket and make the trip to the Ebenfeld Cemetery again.”

“And little Paulie’s black patent shoes. See the navy velvet tops and how they button down the side? Yes, Paulie was walking very well by the time he died in 1916. Anna Daisy, you were nine years old and Alma, you were ten years old. You were both in school. I asked Jonas to help watch Paulie while I lay down to take a short nap. When I woke up, I could see Jonas playing, but I didn’t see Paulie. I ran outside, and Paulie was in the stock tank, face down.

When you girls came home from school, we had to tell you that Paulie had gone to be with God. We bought our fourth white casket and made the trip to Ebenfeld Cemetery to again lay our child there. We know that all four of our other children are playing in Heaven. They are very happy.”

It was quiet for a moment as Mama packed the memory pieces into the boxes and hammered it shut. Anna Daisy and Alma sat silently as they waited. They felt the heartache of their Mama. The heartache was theirs, too.

After the box was nailed shut, Mama smiled and held her arms out to Anna Daisy and Alma. “Now, girls, we have remembered, and we must go on with life. That is what God wants. Put away the box and the hammer. I must see about Eli. I know he is hungry by now.”

Anna Daisy smiled although her tears threatened to flow down her cheeks. Her cheerful Mama was back. She glanced at Alma and grinned. Alma picked up the box and Anna carried the hammer back to the kitchen. The sisters could hear Eli wail for attention.

This is a true story of strength, courage and peace that describes my Grandmother, Anna Loewen Suderman. After Alma and Anna Daisy, Grandma had four more children. Each of us are touched by Grandpa and Grandma Suderman. She continues to be a quaint presence in my life. A mystery I ponder. When my life is filled with discouragement of just living, I remember Grandma. I know in Whom she found strength. I know that when she prayed for each of her many grandchildren by name and great grandchildren and those ‘beyond’, she brought us to Jesus, and I find strength, courage and peace in the same Jesus.

We do not always understand God’s Ways or His Thoughts, but we know He holds our hand and we trust Him.

You will keep in perfect peace him whose mind is steadfast, because he trusts in you. Isaiah 26:3

And the peace of God, which transcends all understanding, will guard your hearts and your minds in Christ Jesus. Philippians 4:7

The Message, Philippians 4:6-7 – Don’t fret or worry. Instead of worrying, pray. Let petitions and praises shape your worries into prayers, letting God know your concerns. Before you know it, a sense of God’s wholeness, everything coming together for good, will come and settle you down. It’s wonderful what happens when Christ displaces worry at the center of your life.