Last night I reread Dad’s words that were recorded in the 1970’s and transcribed. As I read his very own words about so many parts of his life – growing up, going to school, working in a shoe store, college where he was determined not to meet and marry a wife (but he did), gaining a position as janitor and sub for the Clinton OK post office and becoming a ’regular’.

What about his heart? What was in his heart? He grew up on the farm, hearing only the Plautt Deutch language. And here, I will let you hear his words….

Now about my first day in school. It was another situation that entailed quite a bit of excitement. At home we talked only Dutch, and to go to school where the teacher and all the kids talked English, that was quite a situation. They didn’t know what they were talking about. And you looked at them wondered if they knew what they were talking about. But of course I knew what I was thinking all the time. But I couldn’t figure out what they were thinking and saying. Then the Teacher put me up to the blackboard, and she drew an A and a B and a C, and told me to copy those, and I didn’t know what copy meant. She gave me a piece of chalk. And I stood there and held the chalk real tight in my fat little moist hands and I looked at those things she put up there. I was afraid to go to my seat. So I stood there and looked at the things she drew and didn’t know how to make them. I got so nervous, I threw my breakfast on the floor, and poor brother Dick had to clean the floor. And I could go sit down on my seat.

blackboard anymore. It made me so sick.

And then, about church. That was another language problem. At home we talked Dutch, I was supposed to learn English, and then at church, everything was in German. I remember one sermon especially. The preacher talked about wounds, blood and terrible suffering and I caught on to what that was. Then they were singing the invitation song. I wanted to become a Christian. They sang a German song in the Germna language, and I thought it meant Be Very Tender With the Rules, and it was Throw Out the Life Line and Save Your Brother. I got it all wrong. That was my first impression of church (Mennonite).

Dad became fluent in English and Dutch and was able to translate letters written in German for his postal patrons during World War II. I learned that my Dad viewed the language problem as a challenge, and his problem-solving skills to bear on any difficulty he had.

I never had any problem determining Dad’s communication, although I never learned the languages he used, except for English. He always made his expectations for me clear. My Dad, Herman Bennie Siemens,

was a gifted story teller. More than once, Mom would listen and ask Dad, “Are you embroidering the Bible stories again?” The Bible stories were so real to us because of Dad’s gift. During a family reunion, Dad always had a group of young cousins gathered around him, listening to his stories.

Vot gomes shust to my knee

As efer you did see.

In all barts off der house,

But vot off dot? He vas mine son,

Und cuts mine came in dwo

To maker der schticks to beat it mit

Mine cracious, dot was drue!

He kicks oup sooch a touse;

He asks me questions sooch as dese:

Who baints mine nose so red?

From der hair ubon mine hed?

How gan I all dese dings eggsblain

But ven he was asleep in ped,

So quiet as a mouse,

But leaf do Yawcob Strauss. 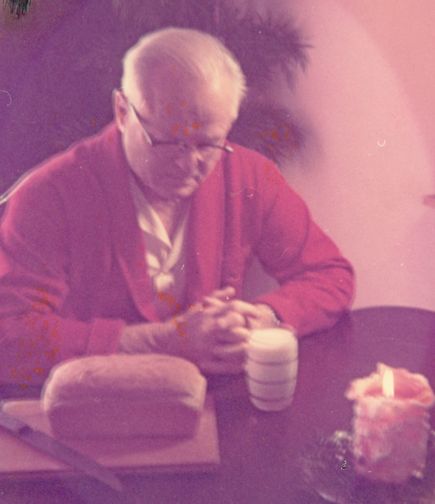 There are many words and stories that Dad told and read, and yet as his steps slowed and his breath became more labored, reading the Bible was of greatest comfort for him. The picture that Mom took after one of his 11 heart attacks says it all. Jesus is the bread of life, and in His Word is everlasting life.

Psalm 37:3-6, Trust in the LORD and do good; dwell in the land and enjoy safe pasture.  Take delight in the LORD, and he will give you the desires of your heart. Commit your way to the LORD; trust in him and he will do this: He will make your righteous reward shine like the dawn, your vindication like the noonday sun.