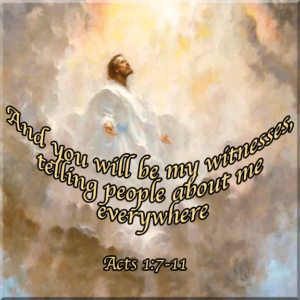 He replied, “The Father alone has the authority to set those dates and times, and they are not for you to know. But you will receive power when the Holy Spirit comes upon you. And you will be my witnesses, telling people about me everywhere—in Jerusalem, throughout Judea, in Samaria, and to the ends of the earth.”  Acts 1:7-8.

We put great importance on the last words anyone speaks before they leave this earth.  Reading the last words Jesus spoke, I realize Jesus gave a promise and a command of what would be in His physical absence.  The first is the utter completeness of God’s authority on the earth. The second is we are never alone when the Holy Spirit comes upon us. The third is, who we are in Jesus.  We are His witnesses to the ends of the earth, telling about Jesus.

Every time a cloud appears in the sky, a sense of wonder comes upon me, with the imminent expectancy of His return.  The words of the two white-robed men promise the return of Jesus in the same way.

Jesus testified to the question, Are you the Messiah? Mark 14:62, “I am. And you will see the Son of Man seated in the place of power at God’s right hand and coming on the clouds of heaven.”

For the Scriptures say, “‘As surely as I live,’ says the Lord, ‘every knee will bend to me, and every tongue will declare allegiance to God.’” Romans 14:11.

After saying this, he was taken up into a cloud while they were watching, and they could no longer see him. As they strained to see him rising into heaven, two white-robed men suddenly stood among them. “Men of Galilee,” they said, “why are you standing here staring into heaven? Jesus has been taken from you into heaven, but someday he will return from heaven in the same way you saw him go!” Acts 1:9-11