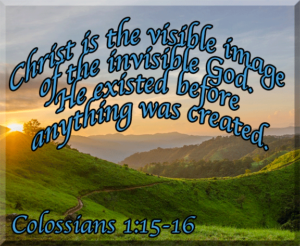 Christ is the visible image of the invisible God. He existed before anything was created and is supreme over all creation, for through Him God created everything in the heavenly realms and on earth. He made the things we can see and the things we can’t see—such as thrones, kingdoms, rulers, and authorities in the unseen world. Everything was created through Him and for Him. Colossians 1:15-16.

He existed before anything was created and is supreme over all creation and He looks like his Father God.  He has all authority over all things and holds all things together. He is the head of the church. He is first in everything. He is the first of all who rise from the dead in His Name.

This Jesus made the things we see, and the things we cannot see.  Everything was created through Him and for Him.  The heavens are yours, and the earth is yours; everything in the world is yours, You created it all. You created north and south. Mount Tabor and Mount Hermon praise your Name. Psalm 89:11-12.

Jesus told him, “I am the way, the truth, and the life. No one can come to the Father except through me.  If you had really known me, you would know who my Father is. From now on, you do know Him and have seen Him!” John 14:6-7.

He existed before anything else, and He holds all creation together. Christ is also the head of the church, which is His body. He is the beginning, supreme over all who rise from the dead. So He is first in everything.  Colossians 1:17.