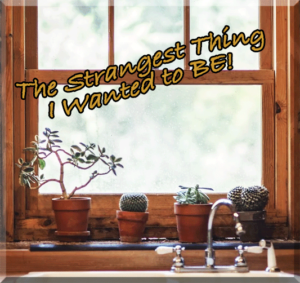 What a surprise to learn about the momentous decision to BE something.  The time I could spend longest in thinking, was at the kitchen sink.  Thinking about what I wanted to be happened here, where I was required to wash dishes looking out the window.

Here I thought about a microphone and inched up the window three inches to the world.  I can’t remember why an opera singer came to my mind.  Perhaps it was the records we played on the victrola on Grandpa Suderman’s farm in Kansas.  The name I remembered was Madame Schumann-Heinke. There were more.  This was in 1936. For more than a year, dish-washing meant a concert for me.  Then I realized they sang in foreign tongues.  Foreign to me.  I added a foreign tongue, I didn’t understand and sang away, hearing the cheering in my heart.

Mother later told me she knew when the dishes were done, I closed the window and the concert stopped.  One day, I had a different desire – I heard that secretaries sat on their boss’s lap.  I giggled, but later when 16, a lawyer asked me to do some filing.  He asked how much pay I wanted.  I told him I was paid 50 cents an hour for baby-sitting. When I saw the shelves of dusty books, being a secretary and I lost my desire to sit on his lap.

One afternoon, when I was about seven years old. I wanted someone to play with.  The fastest way to me, seemed to dig through to the other side of the world where Chinese people lived.  After I dug several shovels full oput of the hole, I knelt down and hollered, “Hey, want to come play with me?”  No answer! After repeating several times and not getting an answer, I gave up.  Later, I learned it would have been impossible to dig through the earth – something about rocks were in my way.  That experience made me long to be a missionary in China.  It didn’t happen, and then I met a Chinese girl.  I told her my childhood dream.  She told me, while pretending to row a boat, “It took a long time to get here!”

The one thing I didn’t want to do would be to teach school. My parents began married life in 1928, teaching in a two-teacher country school.

I majored in music in college from 1947 – 1951.  I led singing in various churches and taught children Christian songs and then met my husband. After 4 years of having 5 babies, one died at birth, I majored in diapers. One day my friend brought her son to me to teach him piano lessons.  As I explained something, his eyes brightened as he understood.

When my four were in elementary school, I taught music in an elementary school for two years. When we moved to another state, no music positions were available, but a 6th grade classroom position was open.  Always a multi-choice kind of person, I tried it. I taught sixth grade, second grade, and then came a classroom of sixth grade students who challenged me. I wanted to learn how to teach ‘gifted and talented’ students who needed more. Soon I had a master’s degree.

I realized when I came home two things.  First, I had nothing to study and second, I still had questions on how children learn.  Each one thought differently.

After 9 decades, I have learned that the ‘Wondering Questions’ that come to my mind lead me to the study that will never ends. This brings me to the story of Grandpa Suderman.

Ready to graduate from High School, I sat at the breakfast table, trying to be patient as my Grandpa slowly read from the Bible.  When he finished the reading, he closed the Bible and slowly lifted his eyes and said something most profound.  His blue eyes smiled, reflecting the wonder on his face. “I never noticed that before!”  How I wish I could ask him what he noticed and ask what scripture he read that day.

After retirement from thirty-one years teaching, I cared for my mother, and after fourteen years, I cared for my husband for four years until his death in 2018. I began writing devotions and blogs – and slowly I turned to the joy of writing about the God’s Word that never changes.

How sweet are your words to my taste, sweeter than honey to my mouth! Through your precepts I get understanding; therefore, I hate every false way. Psalm 119:103-104.

And let the peace of Christ rule in your hearts, to which indeed you were called in one body. And be thankful.  Let the word of Christ dwell in you richly, teaching and admonishing one another in all wisdom, singing psalms and hymns and spiritual songs, with thankfulness in your hearts to God. And whatever you do, in word or deed, do everything in the name of the Lord Jesus, giving thanks to God the Father through him.  Colossians 3:15-17.