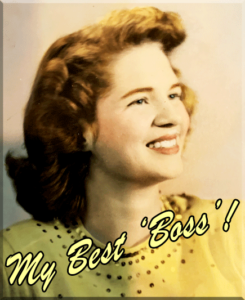 My varied jobs consisted of cleaning an apartment, baby-sitting, filing in an office, leading singing in various churches, and then thirty-one years of teaching school.

Each job didn’t seem too difficult. What seemed difficult was growing up and living up to Mom’s standards.  I recall one time as a teenager, telling Mom that when I grew up, I would wash dishes ‘my way’.  One day I remembered that conversation as I washed dishes in my kitchen as a young mother.  I compared, and yes, I washed dishes Mom’s way. Chagrined, I continued – laughing.

Just before marriage, I considered how I liked 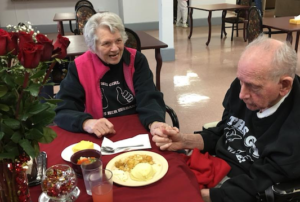 As an afterthought, I added, “And then there is God!” I recalled when I came home and saw Mom was not home, and she left the sink full of dishes, and a note on a folded tea-towel, asking me to wash dishes when I came home.  I went out to play. When Mom came home, she took me into the kitchen, asking why I hadn’t washed dishes. She slowly unfolded the tea-towel, and there was a Hershey bar.  Obedience has a reward.

Before we celebrated one year of marriage, Dan, 5 lb.- and Don,7 lb.- were born. Don did not live. I accepted that as God’s Will. Then in 2012, my husband of sixty years was diagnosed with Lewy Body Dementia. Then my life was uprooted, and we moved to be close to our son, Tim.  Four years before Anna challenged me to write blogs and brief devotions.  Slowly to upload to my website, I learned to create with WordPress.

I used pictures of a Daisy, to remind myself of my Mother. Slowly spending time with God’s word early in the day became a way of life. I realized that God in all His Glory is more than an afterthought.

I cared for my husband until I was unable to lift him up and put him back in bed when he fell, which was often. Then came visits to memory care.  Finally, in 2018, a month after our Sixty-sixth wedding anniversary, he died.

Two years before his death, our firstborn died. Then one year before his death my second brother died. Death seemed to surround me.  I learned that the scriptures I had read through the ages became more meaningful each day.

When I fell, and fracture my left hip, I continued to listen to sermons at night, and one night I heard this verse…So, whether you eat or drink, or whatever you do, do all to the glory of God. I Corinthians 10:31. At that time I was going to rehab, learning to walk with the walker, and learning to exercises, often going past my endurance.

Eating was the least I did.  I gave God the glory for the strength and will to continue to exercise.  One day, clinging to the parallel bars, I began singing one of my favorites, “Goin’ Home, Goin’ Home, I’m a-goin Home!” I explained to my therapist.

How did I grieve for my husband after sixty-six years of marriage?  I rejoiced that his journey of confusion, blindness, and inability to care for himself was at an end. Every night, I look at the stars and praise God for Ed and for our life together, and for our children.  God is our Caretaker in life and in death. So often our conversation in the nursing home was about the goodness of God sending Jesus to teach us and lead us Home for an eternity.

He gives us treasures in His Word — and provides strength, peace, joy, understanding, and fights for us (Exodus 14:14) The Lord will fight for you, and you have only to be silent.

Rejoice in the Lord always; again, I will say, rejoice. Let your reasonableness be known to everyone. The Lord is at hand; do not be anxious about anything, but in everything by prayer and supplication with thanksgiving let your requests be made known to God. And the peace of God, which surpasses all understanding, will guard your hearts and your minds in Christ Jesus. Philippians 4:4-7.

My ‘best boss’ is my Lord and Savior who has guarded me and the Holy Spirit that has led me all the way.  He is more than a ‘boss’, He teaches me to Love and Obey without feeling stubborn, but thankful to rely on His Faithfulness and Goodness.

He has given me assurance that we can never be separated, that He is The God of Forgiveness whenever I go astray.

For I am sure that neither death nor life, nor angels nor rulers, nor things present nor things to come, nor powers, nor height nor depth, nor anything else in all creation, will be able to separate us from the love of God in Christ Jesus our Lord. Romans 8:38-39.