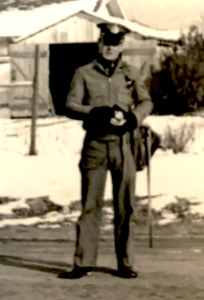 October 16, 1945 was a cool, clear day of autumn. My 1938 “Chevy” was filled and waiting, as with my assistant, I made my first run on Rural Route Number One out of Watonga, Oklahoma. With maps in hand, we read and drove. The 75 miles seemed endless and rough. Notes that read, “turn west to A. F. West” and South to Souther, made the learning easier It took about a week before the miles shortened and became familiar. My assistant stayed at home My maps were left at the office, and I was really on my own.

My old Chevy had been a good car in its day. The miles that dipped through steep canyons, over sand-topped hills, and crossed over bottoms truly test its metal. Soon I realized that I must have a new car. This was quite a problem during those years of wartime. I finally purchased a ‘number’ on a waiting list from a man who did not have to earn his living on wheels. HI rued the day I bought that vehicle! I was a proud owner that first week, and then – the wiring burned out. The shock links gave no end of trouble. Then the rear end fell to pieces, The transmission burned out. The motor had to be replaced. The old joke,” everything is new but the steering wheel” was not very funny.

Just to keep the car on the road, I was paying a flat fee of fifty dollar a month to the garage. It was in the shop every day before and after the route. The taste of that car stayed with me through all those years. 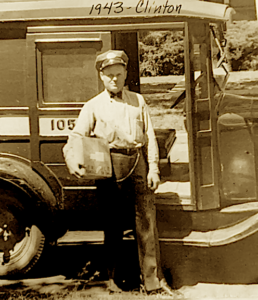 Walking and working on the streets of Clinton for year I could name most people by their first names. It was strange and lonely to live a world “people with metal mailboxes.” But was not too long before the names on the boxes became faces and real people. Farmers have a friendliness tat is not known on city streets. They warming courtesies soon crept into my heart. Families fell into place. This man was a son to the farmer on the next mile, the farmer down the road had married sisters, some had children in college, and some had parents living with them.

The way my patrons shared their garden produce, not only fed us, but warmed our hearts as well. Through the years we have written many heart-felt “THANK YOU!” noes. I am sure we have missed many more. Whatever the gifts, they were all appreciated. Then usually at Christmas time, we were bowed to humility with all the remembrances showered on us. Not only with gifts showered on us. Not only with gifts cane gifts but with the friendship and helpfulness, they became much more than patrons on the route.

This business of being a mail carrier has its problems as well as its joys. Cars break down; bridges wash out, snow piles high; a package is misplaced, and nerves are frayed. The man who said, (on a lovely day in spring) “Son, you earn your money real-easy-like.” Was the same man who told me,” I wouldn’t have your job for love nor money”, on a cold winter’s day when snow had piled high on the muddy bottomless roads. A civil service employee does not meddle I politics, but he sure does appreciate a sign in the middle of a half water puddle that reads, “Commissioner’ Swimming Pool” – just before the election.

Besides the beauty and peace of the countryside, I cannot begin to count the many things that I have received in my daily rounds. The lady of the house insisted I sit down to a good meal after walking back a mile for a tractor when I was stuck in the canyon again.

The newly graded, bottomless corner had stalled me again after a spring rain. I sat a moment trying to figure a way out of that mud. As I opened the car door, I saw a jeep literally flying down the road. The young farmer had seen me from across the mile and came to help. The snow was blinding white, and treacherous and I was stalled a mile and a half from anywhere. When I pulled my way into a warm farm kitchen, the lady insisted on dry clothing and a cup of hot coffee before she allowed her husband to start the tractor to help me out of drifts. Tales like these couldn’t be recounted over and over. Then there were the little things like a message relayed to a worrying wife; a band aid for a scratched hand; a package of garden or flower seeds; a started plant; or just a friendly, “Hi!” on a hard day.  Each deed lives on in the kindnesses done for me.

As a rural carrier, I have always been glad to help those in need. It has only seemed a process of trying to repay the favors done for me. Canned mil was delivered for a baby during a blizzard. Word sent to farmer that his daughter was left alone with an abscessed tooth. A car was started for a lady so she could make her club meeting after all. Utility bills were paid in town. A sick cow was oil-flushed. First aid was applied to a little girl with an injured foot. Baby chicks were placed in warm brooders upon request fires in car and truck have been extinguished. Aid was given to a family at a fatal tractor accident.

One day the radiator hose broke, and the car became hot. A friend came by. With tape, we fixed the hose and with his car we drove to the next farmer’s house. He was not at home, but we used a watering can by the barn, taking water from the faucet. Soon I resumed my duties.  A few days later the sheriff came to our house. It seems someone had stolen that farmer’s saddle. There were tire tracks right to the barn plus footprints. Since my report coincided with my friend’s story, I escaped arrest for saddle theft.  To this day, my friend and I greet each other with “How are you, you old saddle thief?”

Humor on the route came day by day, often in the notes left in the box for the mailman. The very best one started with “My derest maleman” written by a young girl. A Grandma, living alone, left an appreciative note. “Here’s the penny I owe you. Thank you for your kindnesses to an old woman!” On the back of a soil-conservation letter came this one. “See the red banner on the stick by the corner post. That is where I think it would be best for all to put the mailboxes. If you want the responsibility of putting it somewhere else, please move the stake to that position.”

A little boy’s note read, “Please stop at the house. I have something for you.” The surprise was a baby rabbit!  Right after Halloween, I found this note in a neighboring box, “if we get any mail, put it in this box. The kids ran off with our box.”  Another note on the back of a fertilizer bill came this note, “Leave four 3-cent stamps. I’d appreciate you putting the stamps on these letters. I’m tired of waiting (ha ha)!”

The budding of a new romance does not necessarily wait for spring. Letters became frequent and the replies are often perfumed. The blush of a waiting lass at the mailbox only makes the sign surer. Soon there will be wedding invitation in mail.

Then begins the round of parcel post as wedding presents are delivered from far and wide. We have always enjoyed the ‘route wedding.’ To see them off to a new life and to wish them well. Then follows a quiet time of letters from the young married children to their parents until the happy day when the farmer’s wife sometimes leaves a note in the box. “We’re grandparents now. Thought you might like to know.”

Through the years many patrons and friends have left the route. In looking back over records the names have change so much.  Houses are vacant and decaying. The road is longer between boxes.  Yes, some patrons moved to the CITY to a better job, but many leave for an eternal home, after earthly chores are done. I miss them in my rounds but I know they are missed so much more by their loved ones left behind. It turns my thoughts Homeward.

It has been a privilege to be your carrier for almost two decades. Pleasant memories and friendships shall be treasured through the years. Retirement time had been set for December 30,1963.

The routine of well-traveled roads will be change to a new and untried pathway. We both say “THANK YOU AND MAY GOD BLESS YOU ALL. 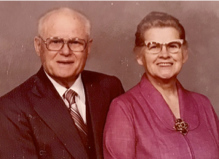 Postscript. Mother was Dad’s assistant on those first days. She made sure she packed lunches each day.  When the grandchildren came along, the best of their visit with Grandpa was riding with him on the mail route. One grandson re-named the route to going on ‘the mail-rock.’

Since Mother played for piano/organ for church, she often helped with organizing music for a wedding or a funeral. You have never lived until you ride with a box of baby chicks chirping on the back seat of the car.