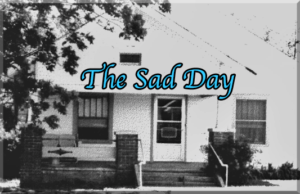 I remember when my Grosmom Siemens left her home and moved into our house when she couldn’t care for herself anymore.

We often visited Grosmom thirty miles away from Clinton, Oklahoma, in Corn, Oklahoma. Here we 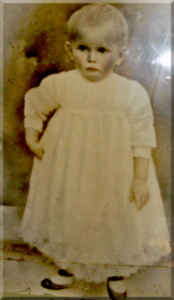 celebrated Christmas, Mother’s Day, family dinners with the rest of the family, and I listened to Plautdietsch language sprinkled with English conversations, laying on the floor wishing my Annaka Siemens could step out of the frame and join me. Yet, she only lived for two years, born 25 September 1911, and died 29 January 1913.

Emilie Brunn Siemens was born June 18, 1876 in the Norka, South Russia. She came to this country in the year 1892 with her parents, and settled near Buhler, Kansas. In 1895, she accepted Christ as her personal Savior, and belonged to the Mennonite Brethren Church there.

Emilie married Jacob B. Siemens on February 11, 1897.  Six children were born between 1897-1911. Jacob traveled and preached in various Mennonite churches, traveling by train.  He taught himself to preach by striding up and down behind the barn holding a Bible.  In between trips, he worked on the farm. Paralysis caused his traveling preaching days to come to a halt. He died in 1930. She sacrificed her health and strength by faithfully caring for her dear Jacob. She continued to live in her Corn home for a period of thirteen years.

In January 1943, she required help and came to our house to live. It was such a change. She slept in my bedroom, and became my confidant, with her speaking Plautdietsch and me in English. We understood each other, as she understood English, and I understood most of Plautdietsch.   She was with us for six months.  During that time, we often spent visiting.  She taught me how to count to 10 in Russian. As WW II heated up, she told me not to trust the Bolsheviks. I wasn’t sure who that was, but I was determined to take her advice. 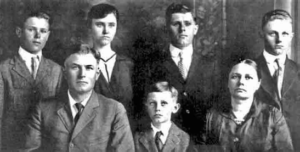 I remember August 7, 1943, very well. Fourteen years old, Mother and Dad, Uncle John and Aunt Matilda were exhausted and decided I could sit with my Grosmom and let them rest.  Grosmom had had a stroke the day before.  My instructions were to let them know if the breathing changed.

That vigil was filled with memories of going to the Mennonite church with Grosmon, her picking sassafras in the driveway to make tea, and how I explained that she shouldn’t make bubbles in the dish washer with the eggbeater, since Mom didn’t want us playing.

Saying High-hoopa, so she would give me a molasses cookie. Then she and my Dad (Herman) laughed.  I remembered when she gave me lots of licorish candy until I threw up in her flower bed from the porch. At Christmas, she gave each of her grandchildren 12 inch long, 1 inch diameter, peppermint sticks. They were sweet, but not as sweet as her last six months with us.

In her memory, I called the dish rag a tubdoak and a small bench, bangsta.  When I had back labor pains much later, I remember her words for Thunder and Lightning.  It sounded like Dunder and Lichenning.  And a pause in a conversation or agreement, she said, “Nah-yo!”

I remember when her breathing changed, and I let my parents know.  I was told to go into the living room.  It wasn’t far enough away, as I heard her last scream.

I couldn’t cry, as I watched others cry at the funeral over my Grosmom. She was still alive in my heart, and I missed my special friend, my Grosmom Emilie.

That Sad Day in my life I remember the ending of a beautiful time with my Grosmom. And the anticipation of seeing my dear GrosMom in Heaven.