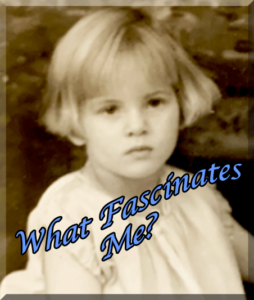 One of the earliest things that fascinated me was living on Avant Street in Clinton, Oklahoma. We had a white picket fence for ‘happily ever after’ living.  I noticed at certain times of the day a parade of men walked down the sidewalk, with white sticks in their mouths and smoke came from them.  It fascinated me because I didn’t know the name of the white stick.  When I learned what they were from Mother and they weren’t good, I began to let the men know that they shouldn’t smoke.

When Gene was about three years old, Mother said we would go to the store and buy new shoes. The afternoon was gliding to an end, and we had not gone yet. Gene showed in independent thinking and left without saying a word. No one noticed his departure.

Mother became frantic, where was her Sheenie Boy…A nick name for 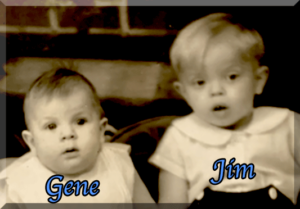 him. Then about three hours later, a neighbor drove up the Poplar lined driveway with Gene.  He found Gene on the highway.  While the neighbor told Mother about finding him, and she thanked him, I asked Gene what had happened.  That is when he told me the thumb story.  He walked along the highway and wondered what would happen if he put his thumb on the edge of the highway.  A vehicle drove by and ran over his thumb.

I decided my little brother deserved bravery medal. I kept wondering why the car had not hit him.  Years later, while in the Oklahoma City Airport, I saw a car of the 1930 vintage and gasped. The tires were not as wide as they are now. So small, I wondered how they could hold up a car. He never tried that again, but once before he attended school, he reported to Mom that he saw lions in the back yard.

When Gene was two years old, he had trouble blowing out his two birthday candles. His birthday was a day before mine, so my Mother asked me to show him how to do it, after he spit on the candles for all he was worth. 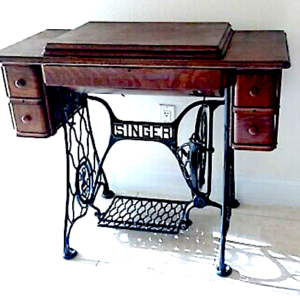 Mother sewed for other people, and sewed our clothes as well, on an old-fashioned Treadle Singer Sewing Machine! Gene hung on to Mother’s left arm and Jim hung on to her other arm.  What fascinated me is why her feet kept rocking the ‘treadle’.  I decided that would make a good toy.  But somehow, she never let me try it out.

Our kitchen in the three-room house, had a bench behind the table where Jim and Gene sat. I knew I was the only girl in the world that had a special seat at the table — the flour barrel. Every morning Mother made a pitcher of Cream of Wheat, with enough milk in it, so we could drink it. I watched my brothers grow red in the face and gulp down two glasses each, and when they said, “More!” in unison, Mother was exasperated.  “Boys, your tummies will burst!”  That was a prophecy that fascinated me as the image in my mind became clear…all of us swimming for our lives in that small kitchen in a sea of Cream of Wheat. Who would save us?

Mind pictures fascinated me through the years.  I wondered how my teacher’s tummy wiggled when she laughed.

When my brothers took my rubber dolly, Rosie, and put her in a blanket that made her fly up in the air.  The last time, Rosie lost her head and I rescued her from my two rascal brothers. Finally, Dad came to the rescue and re-attached Rosie’s head. He could do anything.

Another fascination came as I looked at the letters signifying my grades on my report card.  All the way from A to D.  How did she know which letter to write down?

What does ‘try harder’ mean?  Groan, strain, and what? It was a long time until I learned that I ‘think in pictures’ and make associations between unconnected things.

Then I realize how scriptures open to me and I see the meaning.  When we believe in Jesus Christ, we are to seek the things above.  We are here in this world, yet not of the world…