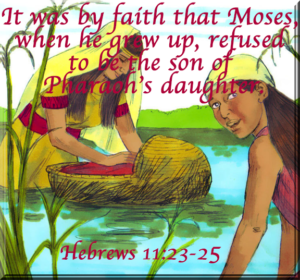 It was by faith that Moses’ parents hid him for three months when he was born. They saw that God had given them an unusual child, and they were not afraid to disobey the king’s command. It was by faith that Moses, when he grew up, refused to be called the son of Pharaoh’s daughter. He chose to share the oppression of God’s people instead of enjoying the fleeting pleasures of sin. Hebrews 11:23-25.

‘To live by faith’ is the key phrase of Hebrews 11! This chapter has been called the roll call of ‘By Faith’ Men! Where does Faith begin?  One day a sixth grader asked me when God was born. The first four words of Genesis gave the answer – In the beginning God.

How could the mother of Moses leave her child for a moment, or allow someone else to raise her precious son?  They knew their son was unusual and a gift from God.

Moses turned down the ‘easy’ life of a prince of Egypt and looked ahead to his great reward by choosing to live for God.  Moses kept right on going because ‘he kept his eyes on the One who is invisible.’  Moses remained faithful, even when the Children of Israel complained during the ‘forty year journey.’

Our eyes stray from our Lord – when we lose sight of the prize and reward of following Him.

He thought it was better to suffer for the sake of Christ than to own the treasures of Egypt, for he was looking ahead to his great reward. It was by faith that Moses left the land of Egypt, not fearing the king’s anger. He kept right on going because he kept his eyes on the one who is invisible. Hebrews 11:26-27.