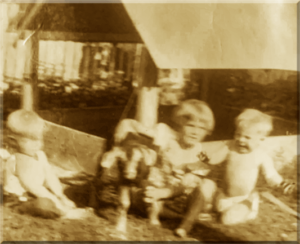 My two brothers and I never seemed to be without toys to play with because of the ingenuity of our Dad. Until I began first grade, we lived behind the confines of our iconic white picket fence.

We had a Sand Pile House Dad built for us.  He also built a steering wheel swing when he brought home a old steering wheel and buried in the ground.  He attached ropes to hang on to as he twirled the steering wheel. We hung on to the ropes, and the twirl lifted us from our feet.

One day Dad brought home a baby goat.  Dad and Mom grew up on farms and began married life on a farm.  After we moved to the ‘little house’, there wasn’t room for a cow or chickens.  Dad found a baby bottle and we took turns feeding the baby goat milk.  According to this picture, it seems our baby brother, Gene, was not happy about having a goat.  Jim was more laid back.  I held on tightly to our goat.

Finally, the goat grew up and Dad began milking the goat.  One day Dad grinned at me as he milked the goat.  He asked me if I wanted some milk.  Of course! That day I met the harsh truth of reality.  He told me to bend way down and he would squirt some milk in my mouth, there would be no need for the formality of a glass.

I bent down and opened my mouth as big as possible.  I thought I would gag as the squirt of goat milk hit my tongue. I wasn’t sure, I liked cold milk, not goat-body warm. The warm milk was a shock.  As the goat grew up, we didn’t play with the goat anymore.

Later, I became the proud owner of a rubber doll, I named Rosie. I rocked Rosie and hugged her.  Mother made several sets of clothes for Rosie.  I spent hours creating her the fashion-doll of the neighborhood with her dresses. 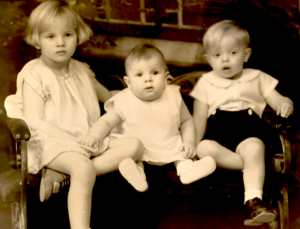 My enterprising brothers conceived the idea for a new experience for Rosie and asked for permission to ‘play’ with Rosie. They placed her in the center of a blanket and began tossing her into the air.  After several tumbles, disaster struck in mammoth proportions.  Rosie landed in two pieces, and Rosie’s head rolled away.

I cried and asked my Dad to re-attach Rosie’s head. He didn’t seem to have time to do so. Rosie’s appearance was hampered with the loss of her head. I hinted to Dad when he sat in the wooden rocking chair.  I took his brawny arm in mine, and pretended it was Rosie, and crooned while I rocked his arm.

Finally, Dad replaced the head on Rosie, and then I could look my Rosie in her eyes again. I don’t know when Rosie and I parted company, but I still have fond memories of her. 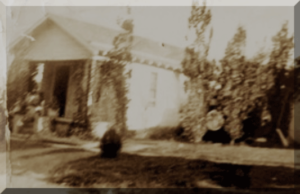 What made that little house on Avant Street in Clinton so memorable?  I remember the Lombardy Trees, like sentries on the west side of the house. Mother used her weekly laundry water to water them. They stood tall and at attention all the time we lived there.  I remember the way the house plan moved from the living room to the bedroom to the kitchen, and a small bathroom off the kitchen. The kitchen had two chairs, one bench against the wall where my brothers sat, and at one corner was the large flour barrel, where I sat.

One day I wouldn’t let my Mother punish me once, and she said she would wait until Dad came home. I spent the afternoon spanking myself with Dad’s leather strap in the bathroom, wailing in sorrow.

Out the back door was the beautiful yard.  I often heard Mother speak of the iconic white picket fence that encircled our playground.

Mother knew we were protected as we played there. She loved us very much. One day, I realized God loves us even more and wants to protect us and redeems us.  When Mom knew we were within the fenced in yard, she could hear us as we played.  We were safe.

One day I realized that God has a ‘picket fence’, too.  It is His steadfast Love for us.  When we learn to love God with our whole hearts, and love others and care for them, we are protected by His ‘picket fence’ of Love.

“Because he clings to Me in love, I will rescue him from harm; I will set him above danger. Because He has known me by name, He will call on Me, and I will answer. I’ll be with him through hard times; I’ll rescue him and grant him honor.” Psalm 91:14-15.