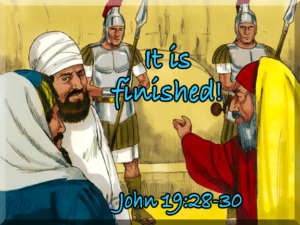 After this, Jesus, knowing that all was now finished, said (to fulfill the Scripture), “I thirst.” A jar full of sour wine stood there, so they put a sponge full of the sour wine on a hyssop branch and held it to His mouth. When Jesus had received the sour wine, He said, “It is finished,” and He bowed His head and gave up his spirit. John 19:28-30.

“It is finished.“ Jesus had completed His mission on earth. After a day of being flogged, mocked, and beaten, Jesus stood before Annas, the Sanhedrin, Pilate, and Herod.   Then He was placed upon the cross.  Why?  Jesus loves us. Greater love has no one than this, that someone lay down his life for his friends.  John 14:13. The following verse tells us, “You are my friends if you do what I command.”

Joseph of Arimathea buried the body of Jesus in a New tomb.  II Corinthians 5:17 reveals Therefore, if anyone is in Christ, he is a new creation. The old has passed away; behold, the new has come.

After these things, Joseph of Arimathea, who was a disciple of Jesus, but secretly for fear of the Jews, asked Pilate that he might take away the body of Jesus, and Pilate gave him permission. So he came and took away his body. Nicodemus also, who earlier had come to Jesus by night, came bringing a mixture of myrrh and aloes, about seventy-five pounds in weight. So they took the body of Jesus and bound it in linen cloths with the spices, as is the burial custom of the Jews. Now in the place where he was crucified, there was a garden and in the garden a new tomb in which no one had yet been laid. So because of the Jewish day of Preparation, since the tomb was close at hand, they laid Jesus there. John 19:38-42