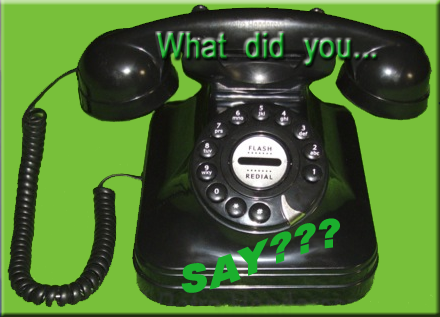 In 1939, Dad asked me to go to the phone and ask the operator what time it was. What a responsibility I had. As the oldest sibling, I was asked to pick up the phone in the hallway and speak to the operator. Gently I lifted down the receiver, and put it to my ear, and spoke clearly and distinctly, “What time do you have now, Ma’m?” Her answer has haunted me to this day. I reported succinctly to my Dad, “She said that it is 6:66 pm.” Everyone stared at me, and then my two younger brothers laughed long and loud. That laughter continues to this day when someone recalls …. “6:66 pm.”

I learned then that you don’t always hear what you thought you heard. And as time went on, I learned that I didn’t always say what I thought I said. Communication is fraught with the pitfalls of misunderstanding. Often the body language betrays the meaning of the spoken words.

My Dad was a master storyteller. Once you heard a Bible Story from Dad you never forgot it. His whole countenance mirrored the message of the story as we three children sat wide-eyed afraid to breathe. The living room disappeared as the details he told in a breathless voice painted a picture more vivid than a master painter could paint in oils. Indeed, his muscular arms aided in clarifying the master story-painting.

We grew up listening to a Bosch Radio, 4 feet tall and 2 feet wide. We listened, but later I realized that we ‘watched’ the radio as Fibber McGee and Molly, Charley McCarthy, The Shadow Knows, Jack Armstrong-the All-American Boy poured their lives in our living room.

Then I became a Mother to four adorable children, now terrific adults. I learned that as they flew out the back door was not the time to holler, “Don’t slam the door!” The ‘slam’ echoed through my head. Then I amended my instruction, “OK, slam the door, but mind me!” I don’t think they heard!) We had other times of sharing chores. I know our second son would deny it or smile sheepishly, but he often told his siblings that if they washed the dishes for him, they would get a surprise from Mom. They learned a lesson about mis-communication.

Then came the time when our three sons learned the wonders of ‘dit-dah’ communication from their Dad. The four male family members went on triangulating ham radio adventures. Our oldest son took this challenge to heart, taking the ham radio licence test in Kansas City. But that is another story. In 2008, Paul wrote a communiqué that described his experiences learning ham radio when he was on the threshold of puberty. No, it doesn’t begin with, “It was dark stormy night…!”

My favorite contact was made on the 2-meter band. I used to listen to Dad talk to the guys from the Boothill Club (Dodge City) talk on Sunday nights. One Sunday night I was feeling extra confident and Dad wasn’t around so I CQ’d and this guy answered me. We were talking for awhile and he said his daughter was listening and wanted to know how old I was. I told him, and he said she was the same age, but had to sign off because she was beating him up for telling me about her. I don’t think I ever went on the 2-meter band again after that. But it was fun to sit with my Dad and brothers and practice code and learn radio theory. I still remember the practice question on my novice test. What does FM stand for? Fading Motorboat or Frequency Modulation? I got that right and passed. I really don’t remember the rest of the theory; I just could never resist breaking Ohm’s law.

While teaching a group of elementary students the art of participating in a discussion, I learned the danger of mis-perception. I emphasized with the small group sitting in a circle that there was no need to raise their hands, just watch the other person. When he is finished, then you may speak. Suddenly I realized that 4 or 5 of the more verbal students were leaning forward in their chairs in such a way to be in danger of falling. Their eyes were intently watching the speaker, waiting to pounce on a second of silence to enter the fray of words.

There are two sides to the Coin of Communication – there is the speaking and there is the listening. In between those two sides lies the murkiness of perception. When I compare the tedious written communication that has progressed just in my lifetime, I am astonished. In just 82 years we have gone from writing with a pencil on a tablet to speaking into a computer to make the words turn somersaults and land on the page. We have the ability to take classes from a university ‘through the air’ and capture learning on our various technological marvels of communication. We learn the terms Wi-fi, G-4 and wireless. Sometimes I feel like my Grandmother Suderman after the landing on the moon. “If God had intended for us to the moon, He would have…” Always wondered what Grandmother envisioned.

How did this all come about? I read this… The Chappe brothers, in France, in 1791, were in their teens and were going to schools some distance apart but visible to each other. They obtained permission to set up a signaling system so they could send messages to each other. Their semaphore system consisted of movable arms on a pole whose positions denoted letters of the alphabet. Napoleon liked the idea, and soon semaphore system was set up in many places. (http://www.telephonetribute.com/historical_information.html)

Before that time, there were signal fires that announced the arrival of the Spanish Armada in 1588 AD. The native Indians of this country used smoke signals to communicate. My question is – how did they avoid typos? Misunderstandings created by a mis-wave of an arm or flag – or a misplaced smoke signal? What if the wind wafted away a stray puff? Who was the ‘spell-checker’’?

According to a timeline, I noted that in 1791 there were wars throughout Europe and United States. Obviously communication then did not circumvent bloodshed. And still doesn’t. And I wonder about communication since the world began and God as the Great Communicator.

There is no question as to what God conveyed in Genesis 1:31a – God saw all that he had made, and it was very good. As I read Exodus and read all the commandments that God gave his people, I realized several things. God knew exactly what he wanted his people to do and gave explicit instructions. His people listened to His words with their whole being. When God spoke, they were not multi-tasking!

If God spoke to me, would I have faulty perception? Would I be too busy texting to hear God speak? Would I try to apprise God of my own supposed wisdom? Or would I listen?

Meanwhile, I read God’s Word – word for word – savoring His majesty, his power and his omniscience. My heart hears his Words.

Receive, I pray thee, the law from his mouth, and lay up his words in thine heart. Job 22:22

Keep your lives free from the love of money and be content with what you have, because God has said, “Never will I leave you; never will I forsake you. So we say with confidence, “The Lord is my helper; I will not be afraid. What can mere mortals do to me?”” Hebrews 13:5

Listen and hear my voice; pay attention and hear what I say. Isaiah 28:23