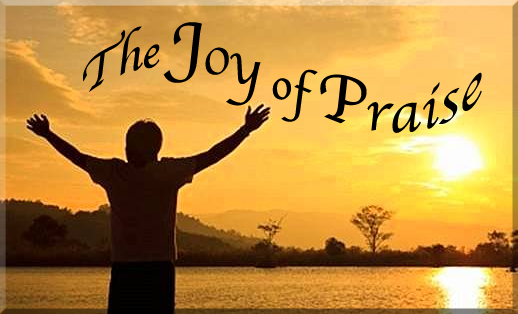 Once upon a time…I like
stories that begin this way. There was a young lady who had no clue as to what
Praise could be.  Is it a song you sing
in church?  Is it when you do something well
and almost everyone praises you?  This
young woman knew what being thankful meant.
She was constantly thankful for her husband, her four children, and
their mates, and grandchildren.  When her
great-grandchildren were born, she gave thanks.
She wasn’t rich, she wasn’t poor.
She had enough.  She was content.
Then one day, at the age of
84, she fell into a deep chasm.  Old
people are supposed to have it altogether, but that one day, she knew she
groped in the darkness.  She believed in
Jesus as her Savior, and it had been easy to be thankful for the many gifts He
showered on her. The Dark Day her granddaughter called there was no
thankfulness, only questions.  Her
granddaughter asked if she was sitting down.
Answering, ‘yes,’ the granddaughter told the Old Lady that her first-born
son was in the hospital with a brain tumor and would undergo surgery in 3 days.

The sun darkened that day,
as she cried out to God in pain.  Where
was the peace and the thankfulness. The day of waiting to hear about the
surgery results came. Had her oldest son made it through the surgery?  She learned that the night before the
surgery, he had had a heart attack. Would God take him home?  She remembered his last visit, just three
months before, saying goodbye. Was the angst she felt then a time of warning, that
she would not see him again?  The Old
Lady shrugged off the chill around her heart.
What could she do as she
waited for the twelve-hour surgery to be completed?  She would thank God, no. She would praise Him.  How do you praise God at a time like this?  She searched her heart for reasons to praise
God. She remembered the joy she felt to hold him the first time in her arms.
She could praise Him for trusting her to be her oldest son’s mother.  The Old Lady could praise God for the moments
and minutes of a lifetime watching him grow into manhood and begin a family of
his own. That was a beginning.
Praise became a ‘waiting’.  A waiting when negative voices interrupted
the praise with questions and thoughts. ‘Why
didn’t you’ questions came repeatedly, over and over. The Old Lady resolutely
returned back to the praise.  Finally the
day ended and the 12-hour surgery ended. The Old Lady’s son lived.
The Old Lady’s other two sons
visited their brother. They sent a picture of the oldest son to their Mother.
The Lady cried until finally the sobs subsided.
Why?  She cried tears of joy to
see her son alive.  She cried tears of
pain to see a visible reminder of what he had endured.  She cried tears of compassion to see the
peace in his eyes.  And then she
continued crying, realizing these were ‘tears of praise’ for answered prayer
and for deliverance of her son.
Sometimes praising hurts
because it comes through a valley of pain, waiting and not knowing.  Praise comes through being heart-ready and
understanding sacrifice and love with more than the mind, but with the heart,
choosing the Who to praise.  Praising is
made up of trust and hope and faith in the One who defeated death with his
resurrection from the dead.  The fact
that He lives, makes Him worthy of praise.
Praise is an act of our will
that flows out of an awe and reverence for our Creator. King David understood
this.  “Let everything that has breath praise the Lord.”  Psalm 150:6  Great is the Lord, and greatly to be praised, Psalm 48:1.  Praise the Lord! Praise, O servants of the
Lord, Praise the name of the Lord! Psalm 113:1.
David’s praises became
prayers for him and for us, as we read the book of Psalms.  Praise is a natural response to God and
happens as a result of knowing God.  God
calls Himself, “I AM.”  In Revelation
22:13 – “I am the Alpha and the Omega,
the first and the
last, the beginning and the end.”
When we try to replace God’s I AM with our own ‘I am’,
our life becomes devoid of meaning, an empty shell without the hope, peace and
trust that are ours in Him. ‘Doing life’ on our own, we forget that we are
always dependent on God.  Without Him we
dwell in desert land of want and desire in this world without His living water
to sustain us.
Praising God helps restore us to the right
relationship in God.  “Draw near to God, and he will draw near to you.” James 4:8.
Living a life of praise is an attitude of love
and forgiveness and rightness before God.
When we commit our lives to Him and praise Him, our faith grows.  “Count
it all joy, my brothers, when you meet trials of various kinds, for
you know that the testing of your faith produces steadfastness.  And
let steadfastness have its full effect, that you may be perfect and
complete, lacking in nothing.” James 1:2-4
“Sing to the Lord, all the earth; Proclaim good tidings of His salvation
from day to day. Tell of His glory among the nations, His wonderful deeds among
all the peoples. For great is the Lord, and greatly to be praise; he also is to
be feared above all gods.” I Chronicles 16:23-25
Addendum:  As The Old Lady
writes, she is praying for her oldest son’s second brain surgery. She is giving
praise that God’s will be done.  And she
waits on Him and she finds peace in quietly praising Him.