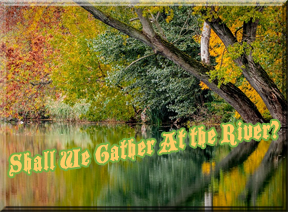 This
hymn has special meaning for me.  The
first time I heard this hymn, I was twelve years old.  My Grosmom Emilie (paternal grandmother)
rocked gently in her new steel chair on the front porch singing, ‘Yes,
we’ll gather at the river,
The beautiful, the beautiful river;
Gather with the saints at the river, That flows by the throne of God.’
My Grosmom was born in June of 1876,
and came to this country from Russia at the age of sixteen.  I could not fathom such a trip at that age
and admired my Grosmom.  I wondered then
which river she sang about.  She spoke
only Plautt Dietch and I spoke English – yet we spent hours visiting with each
other.
Revelation 22:1-2 tells of the special
river – not the Dneiper River in Ukraine or Volga that she had lived near.  Robert Lowry, the composer of this hymn,
thought about this same scripture.  He
lived from 1826 – 1899, and wrote this hymn in 1864, when Grosmom was twelve
years old in Russia.  How then did my
Grosmom know this song?  Was Grosmom
thinking about her family, her loved ones, often separated her on earth by
miles, gathered together on the shore of the Beautiful River.
Revelation 22:1-2 – Then
the angel showed me a river with the water of life, clear as crystal, flowing
from the throne of God and of the Lamb. It flowed down the center of
the main street. On each side of the river grew a tree of life, bearing twelve
crops of fruit, with a fresh crop each month. The leaves were used for medicine
to heal the nations.
One source I read described Robert Lowry
as a cheerful man with a quick mind. He often gave vivid descriptions.  He painted word pictures for others to see as
he preached.  His words described Heaven
with joy.  While enduring the sweltering
heat, he was totally exhausted physically.
A contagious epidemic hit New York City then – causing untold
deaths.  In his pastoral duties, he
visited members of his congregation and buried those who died.  While thinking about all the people who were
dying, Robert Lowry thought about the great reunion at the ‘river of life’ in
heaven.  In his mind he envisioned God’s
throne, the heavenly river of life and the gathering of the saints. He read the
scripture from Revelation 22:1-2. He reveled in the thought of the beauty of
the ‘river of life’.  Even though he died
in 1899, his words continue to be sung to give hope and comfort to many people by
giving expression to their deepest desire to praise God for His unfailing
goodness.
It was in 1943, during World War II, when
my Grosmom’s death finally came. It was a stifling August afternoon.  Her death was overwhelming to me.  It brought me face to face with the mystery
of death.  Her life was spent in serving
others.  She raised four sons and one
daughter.  I have a large photo of the
daughter she lost to meningitis hanging in my living room.  Grosmom took care of her husband, Jacob after
he was paralyzed and was unable to preach sermons, conduct auctions, or farm.
It has been seventy-four years since Grosmom
died. I still remember her steadfast faith in God and the message of the hymn
she sang so often.  I remember our
dual-language conversations.  She taught
me faith in Jesus Christ by singing.  Now,
as I say goodbye to family members, one by one, I am comforted. I remember
Grosmom’s voice so long ago singing the hymn, Shall We Gather At the River.

Thank you, Robert Lowry, for sharing
your gift of faith and hope-filled words to so many as they sing the song God
gave you.
Psalm 46:4-5 – A river brings joy to the
city of our God, the sacred home of the Most High. God dwells
in that city; it cannot be destroyed. From the very break of day, God will protect it.
Isaiah
43 – 1-2 – But
now, O Jacob, listen to the Lord
who created you. O
Israel, the one who formed you says, “Do not be afraid, for I have ransomed you. I have called you by name;
you are mine. When you go through deep waters, I will be with you. When you go through rivers of difficulty, you
will not drown. When you walk through the fire of
oppression, you
will not be burned up; the flames will not consume you.
2
Kings 5:9-10 – So
Naaman went with his horses and chariots and waited at the door of Elisha’s
house.
10 But Elisha sent a messenger out to him with
this message: “Go and wash yourself seven times in the Jordan River. Then your
skin will be restored, and you will be healed of your leprosy.”
John
7:37-39 – On
the last day, the climax of the festival, Jesus stood and shouted to the
crowds, “Anyone
who is thirsty may come to me! Anyone who believes in me may come and
drink! For the Scriptures declare, ‘Rivers of living water will flow from his
heart.’” (When he said “living water,” he was speaking
of the Spirit, who would be given to everyone believing in him. But the Spirit
had not yet been given, because Jesus had not yet entered into his glory.)