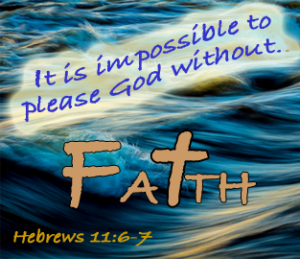 Hebrews 11:6-7 – And it is impossible to please God without faith. Anyone who wants to come to him must believe that God exists and that he rewards those who sincerely seek him. It was by faith that Noah built a large boat to save his family from the flood. He obeyed God, who warned him about things that had never happened before. By his faith Noah condemned the rest of the world, and he received the righteousness that comes by faith.

What does Faith mean?  It means Believing.  What does it lead to?  Trusting, Obedience, and Righteousness.

Noah heard news from God, he had never heard before.  If you were told to build a huge boat today, how would you begin?  God gave Noah the understanding and ‘know-how’.  God and Noah were on speaking terms.  Noah knew God’s voice.  Noah listened to God.  And followed his instructions. Why?

Through faith and obedience, Noah received righteousness.  Noah followed God’s plans.  He was a humble man, God’s man.  Noah didn’t think himself to be smarter than God.  He built the boat God’s way. Noah and his family were saved from death from the flood.

Abraham also obeyed God by faith and went on a long trip, an adventure. Abraham didn’t have the details, he simply followed God.

God has plans for each of us.  Are we listening and following Him?  Do we delight in belonging to God?  Praising God is the first step…How much does God love us?

John 3:16-17 –  “For this is how God loved the world: He gave his one and only Son, so that everyone who believes in him will not perish but have eternal life.  God sent his Son into the world not to judge the world, but to save the world through him.”

Hebrews 11:8 – It was by faith that Abraham obeyed when God called him to leave home and go to another land that God would give him as his inheritance. He went without knowing where he was going.