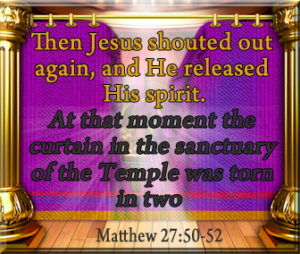 Matthew 27:50-51 – Then Jesus shouted out again, and He released his spirit. At that moment the curtain in the sanctuary of the Temple was torn in two, from top to bottom. The earth shook, rocks split apart…

The Day when LOVE made the difference!  What brought the world to this point to see the fury of an earthquake and rocks spitting apart?  Each time I read  this scripture I envision the scene…Jesus hanging on the cross in agony, the crown of thorns on his head.  At noon, the whole land was plunged into darkness until 3 pm.

He was given sour wine on a sponge. After Jesus tasted this, He said, “It is finished!”  This is when Jesus released his spirit, his life. At that moment  the veil in the temple was torn from the top to the bottom.  And the tombs opened.  Bodies of the dead were raised and walked in Jerusalem.

This same Jesus, who lived with His Father God, and was with Him as the world was created, born in a lowly manager to be the sacrifice on the cross for our sins, died for each of us.

Is this just a story of words to fill a book?  Or will we believe and live each day, the words of the Roman soldiers who were present at the scene?  This Man is truly the Son of God!  What will you do with Jesus?  This question is to be answered by each of us during our life time.  There is no ‘maybe’!

The Roman officer and the other soldiers at the crucifixion were terrified by the earthquake and all that had happened. They said, “This man truly was the Son of God!” Matthew 27:54.

Matthew 27:52 … and tombs opened. The bodies of many godly men and women who had died were raised from the dead.