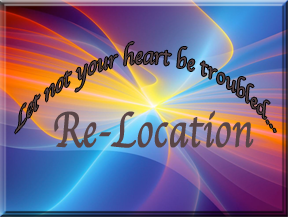 Finally, after a
year here, I notice a possession is missing.
A sewing machine.  Where could it
be?  Does it matter? Is it the idea that
an item I once owned is no longer available? Moving in the world brings change
– like when the old dining table fell apart on the move or will our mail find
us, will our internet ever be hooked up so we can communicate?  Not a concern in Heaven.
A picture of
relocating to Heaven…is accomplished through Jesus Christ.  He explains through his apostles what needs
to happen before that grand relocation.  Our
list of to-do’s is simply a mind-set, choosing Jesus, with all of our hearts.  We choose to hear and believe that Jesus is
the Son of the Living God.  No holding
back…an all-in mind-set gives us the vision of our Goal.  Choosing gives us the ability to hear God’s
Words believing. God spoke the universe into being.  Only through that belief can our mind truly
understand how to trust God’s leading in our lives.  For if we believe that God is able to create our
universe in seven days, He is able to care for us no matter what is happening –
in sickness, in poverty and in death.
What does it take
to move?  Faith.  Not just any faith or belief, but faith in
God, Jehovah. Yahweh.  As I ponder faith,
I realize that Faith is believing God is, God can, God will, for God is all
powerful and faithful.  In the Old
Testament, who had the most Faith? Abraham, Moses or Elijah?  Elijah was available to God, and God used
him.  “Then the angel of the Lord came to Elijah, “Go down with him’ do not be
afraid of him.”  So he arose and went down to the king.  2 King 1:15.
Moses was a man of great humility, he did not try to justify himself, he
allowed God speak for him.  When the
children of Israel became stiff-necked, he offered his own life as he
interceded for them.  “Now the man Moses was very meek, more than
all the people who were on the face of the earth.”  Numbers 12:3

Abraham did
nothing, yet got everything.  He simply
received by faith.  He never questioned, simply
believed God.  He believed, though he was
99 years old. God began this conversation with Abraham by introducing himself
as God Almighty and commanded him to walk blameless before him. God makes a
covenant with Abraham to multiply him greatly and make him into a great nation
and give him the land of Canaan.  God
changed his name from Abram to Abraham and Sarai to Sarah.  God Almighty changed Abraham’s whole life, and
Abraham believed.  God changes our lives
when we believe and follow His Son Jesus.
He believed when God
said to sacrifice his only son and believed God would provide a lamb for the
sacrifice.  Abraham believed when God
said for him to re-locate in Canaan.  He
left his home and traveled, because he believed God.  I often wonder… no restaurants along the way,
never sure of food or water, or a motel?
Yet, Abraham never deviated from his focus, from what God asked of him.
• You see that faith was active
along with his works, and faith was completed by his works; and
the Scripture was fulfilled that says, “Abraham believed God, and it was
counted to him as righteousness”—and he was called a friend of
God. You see that a person is justified by works and not by faith alone.  James 2:22-24
• And thus Abraham, having patiently
waited, obtained the promise.  For people swear by
something greater than themselves, and in all their disputes an oath is
final for confirmation.  So when God desired to
show more convincingly to the heirs of the promise the unchangeable
character of his purpose, he guaranteed it with an oath.  Hebrews 6:15-17
• By faith Abraham
obeyed when he was called to go out to a place that he was to receive as
an inheritance. And he went out, not knowing where he was going.  By
faith he went to live in the land of promise, as in a foreign
land, living in tents with Isaac and Jacob, heirs with him of the
same promise.  Hebrews 11:7-9
• Know then that it
is those of faith who are the sons of Abraham.  And
the Scripture, foreseeing that God would justify the Gentiles by faith,
preached the gospel beforehand to Abraham, saying, “In you shall all the
nations be blessed.”  So then, those who are of
faith are blessed along with Abraham, the man of faith. Galatians 3:7-9