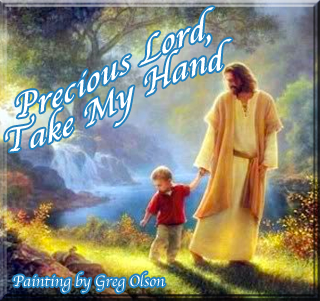 We are born to a God-given Journey of
Life.  This Journey becomes our
story.  We are unaware our Journey has a
purpose from God and becomes our Legacy for those who follow after.  Slowly we learn, through a lifetime, what is
important, what is refreshing, and where to serve God and others on our way.

My husband, of over sixty-five years,
and I listen to older gospel hymns and drink in the truths of God.  Even though Ed is unable to remember me as
his wife, he remembers Jesus and the comfort of His Presence.  His Journey will come to an end when God
beckons and takes him by the hand.  His
legacy is a quiet faith, gentleness, and always serving in the background.
This man never played an instrument or
sang to be heard, yet he encouraged his children in learning, playing, and singing
songs. Now the strong pull of a hymn comforts and communicates God’s goodness
to him in his dark confusing world of dementia.
Now he often mouths the words of the songs as he listens.
As I listen
beside him, one song captures my heart.
I remember learning this same hymn, never understanding the deep
compassion and adoration of our Lord in the words sung.  After a week of visiting Ed, becoming a year
older, watching and wondering what is next, I sing.  Precious
Lord, Hold my hand, lead me on, let me stand. I am tired, I am weak,
I am worn, Through the storm, through the night, Lead me on to the light. Take
my hand precious Lord, lead me home.
With a start, I realize this is my
prayer, and I am filled with wonder.  I
wonder who wrote these words in such a way he seemed to know my heart.  I began searching and read of one man’s
journey and how his story became his legacy of hope in Jesus Christ to many generations.
Thomas A Dorsey was born in Georgia in
1899. His father was a preacher.  When
Thomas was twelve years old, he left school and became a professional pianist,
drawn by jazz and blues music.  In the
early 1920’s, he moved to Chicago to study composition and arranging.  He began to play in nightclubs, writing one
thousand blues and jazz works…only 200 of these were gospel songs.  He brought blues and hymns together and is often
called the Father of Gospel Music.
In 1925 Dorsey married Nettie
Harper.  A year later he experienced a
nervous breakdown and was unable to work for two years.  Nettie took a job in a laundry.  Thomas was later spiritually healed in a
church service.  He committed himself
more fully to God and Christian music.  He wrote “If You See My Savior, Tell Him That
You Saw Me.”  It continues – “Ah, and when you saw me, I was on my
way.  When you reach that golden city,
think about me, and don’t forget to tell the Savior what I said.”
In 1932, Dorsey became the choir
director of Chicago’s Pilgrim Baptist Church, and continued for forty
years.  He saw how the Great Depression
wore down the spirits of the American people.
He viewed songwriting as his ministry and a way to give these people
hope.
In August of 1932, Dorsey planned to
travel to St. Louis to sing solos at a large revival meeting.  His wife, Nettie, was pregnant with their
first child and he didn’t to leave her in her ninth month.  He kissed her goodbye, and left to sing.  The second night of the revival meeting,
after he sat down, he was given an envelope with a message.  It contained four words…”Your wife just
died!”
Dorsey remembered that evening as a
surreal moment.  “People were singing and
clapping happily, and I wanted to cry out in pain and grief.”  He hurried back to Chicago, and found Nettie
had given birth to a baby boy.  Joy in
seeing his son, turned to a double-grief when his son died that same
night.  Dorsey buried them in the same
casket.  After the painful funeral
service, he withdrew from music, his family and his friends.  “I felt God had done me an injustice. I
didn’t want to serve Him anymore or write gospel songs. I just wanted to go
back to that jazz world I once knew so well,” he said.
In the middle of his despair, a friend
visited Dorsey and brought him to a music room with a piano. Dorsey remembered,
“It was quiet; the late evening sun crept through the curtained windows.  His fingers began to browse the familiar
keys. He said, “I felt at peace. I felt as though I could reach out and touch
God. I found myself playing a melody, one I’d never heard of played before, and
the words, Precious Lord, Hold my Hand,
came into my head – they just seemed to fall into place.”
The second verse describes growing
weary during a journey near the end of life or a difficult trial.  The pull of ‘going home’ becomes strong and our
words call out to our Lord with Dorsey…Hear
my cry, hear my call, Hold my hand lest I fall. Take my hand, precious Lord,
Lead me Home.
The third verse begins – When the darkness appears…..Guide my feet,
hold my hand. Take my hand, precious Lord, Lead me home.
Where is home?  Where is comfort? How can we find the
assurance Thomas Dorsey found when he wrote such a song under immense
grief?
Your
unfailing love, O Lord, is as
vast as the heavens;  your faithfulness reaches beyond the clouds.
Your righteousness is like the mighty mountains, your
justice like the ocean depths. You care
for people and animals alike, O Lord.  How precious is your unfailing love, O God!
All humanity finds shelter in the
shadow of your wings.  Psalm 36:5-7
Thomas Dorsey’s journey in this life
ended in 1993 in Chicago.  His legacy
continues wherever people sing the songs God gave his Child, Thomas Dorsey.
Link to
the  Concordia Chamber Choir, directed by
Thomas Dorsey, singing Precious Lord
– https://www.youtube.com/watch?v=Od5lY22b180&list=RDOd5lY22b180
C.
Michael Hawn has written the background to many hymns, including Precious Lord.