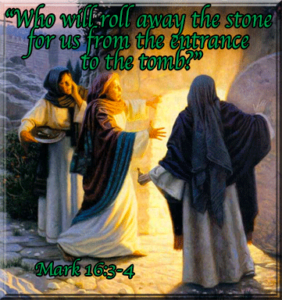 On the way they were asking each other, “Who will roll away the stone for us from the entrance to the tomb?” But as they arrived, they looked up and saw that the stone, which was very large, had already been rolled aside. Mark 16:3-4.

Mary, Magdalene, Mary the mother of James, and Salome, purchased burial spices to anoint the body of Jesus.  As they walked, they wondered how they could move the stone sealing the tomb and separated them from Jesus.  As they came in sight of the tomb, they were astonished to see the stone rolled away. What followed increased their astonishment.

They entered the tomb and found a young man in a white robe sitting on the right side.  This is not what they expected.  More astonishment mixed with fear came.  What had happened?   The angel sensed their fear and trepidation.  Don’t be afraid. You are looking for Jesus of Nazareth, who was crucified. He is risen from the dead!

It has been said that ‘The Resurrection of Jesus Christ is the Crescendo of the Gospel’.  This momentous moment divided the measurement of time from Before Christ to Anno Domini (in the year of the Lord).

The sweetest words of Love is – ‘He Is Risen‘!  “For this is how God loved the world: He gave his one and only Son, so that everyone who believes in him will not perish but have eternal life. God sent his Son into the world not to judge the world, but to save the world through him.” John 3:16-17

When they entered the tomb, they saw a young man clothed in a white robe sitting on the right side. The women were shocked, but the angel said, “Don’t be alarmed. You are looking for Jesus of Nazareth, who was crucified. He isn’t here! He is risen from the dead! Look, this is where they laid his body.  Mark 16:5-6.