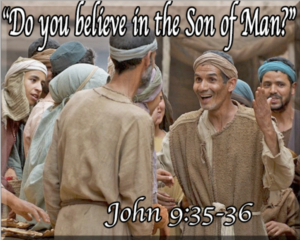 Can you imagine not being able to see?  Not your parents, not your toys, not the clothes you put on? Trusting people who take you somewhere.  Not seeing the food you put in your mouth? Or whether it is dark or light? This then, is the beggar who sat  beside the road.  The disciples asked if he had sinned.  Jesus said, “As long as I am in the world, I am the the light of the world.”

Jesus made mud beside the road, and put it on the beggar’s eyes and told him to wash his eyes in the pool of Siloam (Sent). When the beggar did, he could see.  No one could believe it was the same man.  He told the Jews who asked,  about Jesus putting mud on his eyes, and sending him to wash his eyes.  The Jews did not believe. They called the parents in, who said, We know this our son was born blind, and now he sees.  Over and over they were asked who gave their son sight.

When Jesus learned what had happened, He found the man and asked, “Do you believe in the Son of Man?”  The man asked, “Who is He?”  There was no hesitation.  Jesus said, “He is speaking to you!” And he knew and replied, “I Believe!”

Jesus heals, He changes our hearts, and all we need are open eyes and hearts to know Jesus.  The darkness will not overcome the Light of Jesus. Believe and worship!   He is speaking to us.