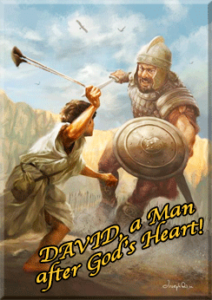 And when He had removed him, He raised up David to be their king, of whom He testified and said, ‘I have found in David, the son of Jesse, a man after my heart, who will do all my will.’ Acts 13:22.

David, the Shepherd Boy, who became King, wrote a ‘Thank You’ Psalm to the Lord. He made many mistakes in life, but always returned to the Lord, confessing his sin. I Chronicles 16:8-34.

Oh, give thanks to the Lord; call upon His name; make known His deeds among the peoples! Sing to Him, sing praises to Him; tell of all His wondrous works! Glory in His holy name; let the hearts of those who seek the Lord rejoice! Seek the Lord and His strength; seek His presence continually! Remember the wondrous works that He has done, His miracles and the judgments He uttered, ‘O offspring of Israel His servant, children of Jacob, His chosen ones!’ I Chronicles 16:8-13. Verse 34 tells us what David continually returned to: Oh, give thanks to the Lord, for He is good; for His steadfast love endures forever!

The Prophet Samuel was sent to Jesse’s house to anoint the King of Israel to succeed King Saul. Jesse was proud of the seven sons who appeared before Samuel. When Jesse was asked by Samuel, is this all your sons? Jesse answered– “There remains yet the youngest, but behold, he is keeping the sheep.” After he was brought in, David was described as ruddy, with beautiful eyes and handsome.  And the Lord said, “Arise, anoint him, for this is he.”

David watched the sheep carefully and learned to praise the Lord. Little did he understand that in caring for the sheep and protecting them from bears and lions, preparation for his future life is the life he would live. Compare a young boy’s life today with David’s.

King Saul, being tormented by harmful spirits, needed someone who played the lyre to refresh him. David entered the service of the King. David was chosen to play for King Saul.

The enemy of the Israelites, the Philistines, gathered their armies for battle. Then the 6-cubit tall (9 feet) Goliath approached the Israelite army, adorned with a helmet, bronze armor on his legs, a javelin of bronze, and a shield bearer carried the shield. “Give me a man, that we may fight.” Saul and the Israelites were afraid. I Samuel tells of David hearing this news, knew that Goliath was threatening the armies of the living God. Saul listened as David said, “Let no man’s heart fail because of him. Your servant will go and fight with this Philistine.” I Samuel 16:32. Saul didn’t believe David could conquer Goliath until David said, “Your servant used to keep sheep for his father. And when there came a lion, or a bear, and took a lamb from the flock, I went after him and struck him and delivered it out of his mouth. And if he arose against me, I caught him by his beard and struck him and killed him.” I Samuel 17:34-35.

Then Saul clothed David with his armor. However, David took off the armor for the weight of how the world fought was not his way. “Then he took his staff in his hand and chose five smooth stones from the brook and put them in his shepherd’s pouch.” I Samuel 17:40. David taught by his choice that faith in God is superior. “And that all this assembly may know that the Lord saves not with sword and spear. For the battle is the Lord‘s, and He will give you into our hand.” I Samuel 17:47. It took one swing of the slingshot and Goliath fell.

What is faith in God? Now faith is the assurance of things hoped for, the conviction of things not seen. For by it, the people of old received their commendation. By faith, we understand that the universe was created by the word of God, so that what is seen was not made out of things that are visible. Hebrews 11:1-3.

Faith grows in God’s Garden of Righteousness and Obedience. What else does this Garden grow? So now Faith, Hope, and Love abide, these three; but the greatest of these is love. I Corinthians 13:13.

Why is faith in God and His One and Only Son, Jesus, so important? For by grace, you have been saved through faith. And this is not your own doing; it is the gift of God, not a result of works, so that no one may boast.

For we are His workmanship, created in Christ Jesus for good works, which God prepared beforehand, that we should walk in them. Ephesians 2:9-10.

We can learn from David, and this prayer he wrote in Psalm 51. Create in me a clean heart, O God, and renew a right spirit within me.
Cast me not away from your presence and take not your Holy Spirit from me. Restore to me the joy of your salvation and uphold me with a willing spirit. Psalm 51:10-12.