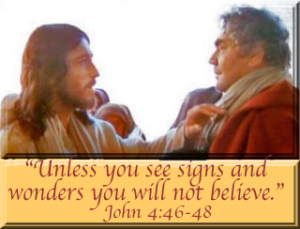 So he came again to Cana in Galilee, where he had made the water wine. And at Capernaum there was an official whose son was ill. When this man heard that Jesus had come from Judea to Galilee, he went to him and asked him to come down and heal his son, for he was at the point of death. So Jesus said to him, “Unless you see signs and wonders you will not believe.” John 4:46-48.

Have you ever wondered about the Why of Miracles?  Are there fewer miracles now? When we read about the miracles in the Bible we understand most of the miracles were performed by God and Jesus.

The one thing that is present in every recorded miracle in the Bible is faith.  Believing.  If we don’t believe in God the Father and His Son Jesus, we can’t see miracles with our hearts!  The official wanted Jesus to be present to heal his son before he died.

Jesus healed the little boy without seeing or touching him. The father left, assured by the words of Jesus.  The most amazing miracle in our lives, is when we believe in Jesus. He performs a miracle and seals us to Him.  The act of baptism is being buried in water, dying to sin, and arising to walk in a new life in Jesus.

God saved you by his grace when you believed. And you can’t take credit for this; it is a gift from God. Salvation is not a reward for the good things we have done, so none of us can boast about it.  Ephesians 1:8-9.

The official said to him, “Sir, come down before my child dies.” Jesus said to him, “Go; your son will live.” The man believed the word that Jesus spoke to him and went on his way.  John 4:49-50.