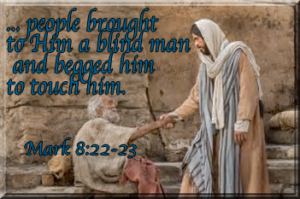 And they came to Bethsaida. And some people brought to him a blind man and begged him to touch him. And he took the blind man by the hand and led him out of the village, and when he had spit on his eyes and laid his hands on him, he asked him, “Do you see anything?” Mark 8:22-23.

Who do you believe in?  Have you ever tried to put a blindfold on, and let someone lead you? Who would you trust to lead you when you can’t see?  I tried this once, after we had visited my blind Uncle.  I saw how he ate his dinner, his plate was like a clock, holding potatoes at 9, meat at 12, green beans at 6.  He read by running his finger over bumps on paper.

Who would you trust to lead you, so you won’t bump into things? What would it be like to have someone spit on your eyes and touch you.  The blind man trusted those who led him to Jesus.  And he trusted Jesus to lead him out of the village.  He trusted Jesus to touch his eyes again, for he could only see people as trees walking.

There are many different people who want to lead all of us in this world. They want to teach and guide us.  Are they going to lead us into a place where we are not safe? The Bible tells us Who to follow in John 14:5-7.  Jesus told him, “I am the way, the truth, and the life. No one can come to the Father except through me.  If you had really known me, you would know who my Father is. From now on, you do know him and have seen him!”

And he looked up and said, “I see people, but they look like trees, walking.” Then Jesus laid his hands on his eyes again’ and he opened his eyes, his sight was restored, and he saw everything clearly. And he sent him to his home, saying, “Do not even enter the village.” Mark 8:24-26.