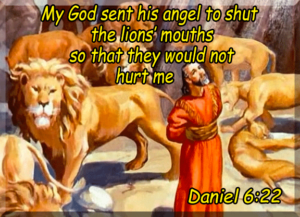 “My God sent his angel to shut the lions’ mouths so that they would not hurt me, for I have been found innocent in his sight. And I have not wronged you, Your Majesty.” Daniel 6:22

Whose law do you follow? God’s or man’s law? King Darius had Daniel working for him faithfully.  Daniel was brought from Israel and continued to worship.  The advisors and magistrates of the King looked for a way to get rid of Daniel. No one, according to the law should bow to anyone but the King. Daniel prayed, bowing to God Almighty three times a day. King Darius could do nothing but throw Daniel into a pit with hungry lions saying,  “May your God, whom you serve so faithfully, rescue you.”

Early the next morning, King Darius checked on Daniel in the den, “Was your God able to rescue you from the lions?” When Daniel answered him, Daniel was brought out of the grasp of the lions. Those who betrayed Daniel were thrown in with the lions.

If you plan to do evil, you will be lost; if you plan to do good, you will receive unfailing love and faithfulness. Proverbs 14:22.  Joshua in 24:15b, chose, “But as for me and my family, we will serve the Lord.” King Darius made a new decree (law)…

“I decree that everyone throughout my kingdom should tremble with fear before the God of Daniel.  For he is the living God, and he will endure forever. His kingdom will never be destroyed, and his rule will never end. He rescues and saves his people; he performs miraculous signs and wonders in the heavens and on earth. He has rescued Daniel from the power of the lions.”  Daniel 6:26-27.