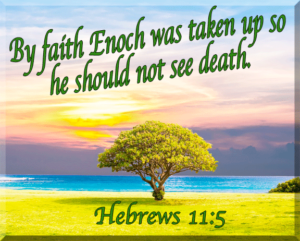 By faith, Enoch was taken up so that he should not see death, and he was not found, because God had taken him. Now before he was taken he was commended as having pleased God. Hebrews 11:5.

Who is Enoch, and why does He make a difference to me? Enoch believed in God.  He is one who Lived By Faith, and is listed in the Chapter of Faith Heroes, Hebrews 11.

The stories my Dad told me of growing up revealed the faith of my Grandfather and my Great Grandfather. What stories Enoch heard  about living By Faith in God! Is this how Noah was taught? In Genesis 6:8-9, But Noah found favor in the eyes of the Lord. Noah was a righteous man, blameless in his generation. Noah walked with God.

Grandparents’ choices in living for God matters. “I know Whom I have believed, And am persuaded that He is able To keep that which I’ve committed Unto Him against that day.” 2 Timothy 1:12.

Living by Faith in God mattered to Enoch, when he walked with God and was no more. It matters to those who come after.

And without faith it is impossible to please Him, for whoever would draw near to God must believe that He exists and that He rewards those who seek Him. Hebrews 11:6.