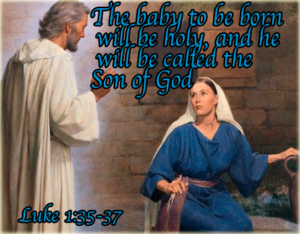 The angel replied, “The Holy Spirit will come upon you, and the power of the Most High will overshadow you. So the baby to be born will be holy, and He will be called the Son of God.  What’s more, your relative Elizabeth has become pregnant in her old age! People used to say she was barren, but she has conceived a son and is now in her sixth month. For the Word of God will never fail.” Luke 1:35-37.

Mary began her day, like every other day. One day an angel appeared to her, telling her not to be afraid, “You have found favor with God.  You will give birth to a son and name him Jesus. He will be great and called the Son of the Most High. He will reign over Israel forever, and His Kingdom will never end.”

Mary asked how this could happen. After the Angel explained, Mary’s response proclaimed her trust in the Lord. A true example of following after the Lord.  Mary, engaged to Joseph, found her life turned upside down. She accepted God’s purpose for her life and followed God’s bidding.  “I am the Lord’s servant!”  After the shepherds worshiped Jesus, Mary, too, pondered all of these events, treasuring each memory in her heart. Luke 2:19.

Mary listened to her Son teach God’s love, she watched as Jesus rode into Jerusalem while people praised Him. She watched as Jesus performed miracles of turning water into wine and healing. She was a witness to her Son’s cross being carried to the hill of Golgotha where He would die.  And Jesus loved His mother.

Mary responded, “I am the Lord’s servant. May everything you have said about me come true.” Luke 1:38.