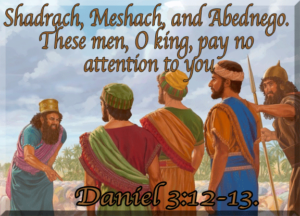 There are certain Jews whom you have appointed over the affairs of the province of Babylon: Shadrach, Meshach, and Abednego. These men, O king, pay no attention to you; they do not serve your gods or worship the golden image that you have set up.” Then Nebuchadnezzar in furious rage commanded that Shadrach, Meshach, and Abednego be brought. So they brought these men before the king. Daniel 3:12-13.
King Nebuchadnezzar made an image of gold and set it up to be worshiped and decreed whoever did not worship when they heard music would be cast into a fiery furnace. The Chaldeans told the King that the Jews paid no attention and did not obey the order, but worshiped their own God.  Nebuchadnezzar flew into a rage, and ordered them  to be thrown into the furnace. He asked the three, “Who is the god who will deliver you out of my hands?”  Their answer showed their complete faith in God.
Shadrach, Meshach, and Abednego answered and said to the king, “O Nebuchadnezzar, we have no need to answer you in this matter. If this be so, our God whom we serve is able to deliver us from the burning fiery furnace, and he will deliver us out of your hand, O king. But if not, be it known to you, O king, that we will not serve your gods or worship the golden image that you have set up.” Daniel 3:16-18.
After a time it is  reported. “But I see four men unbound, walking in the midst of the fire, and they are not hurt; and the appearance of the fourth is like a son of the gods.”  Their hair was not singed, or smelled of fire. The King had them removed, and said, “Blessed be the God of these men!”  He further worshiped God, “How mighty are His wonders!” Daniel 4:3b.
Share